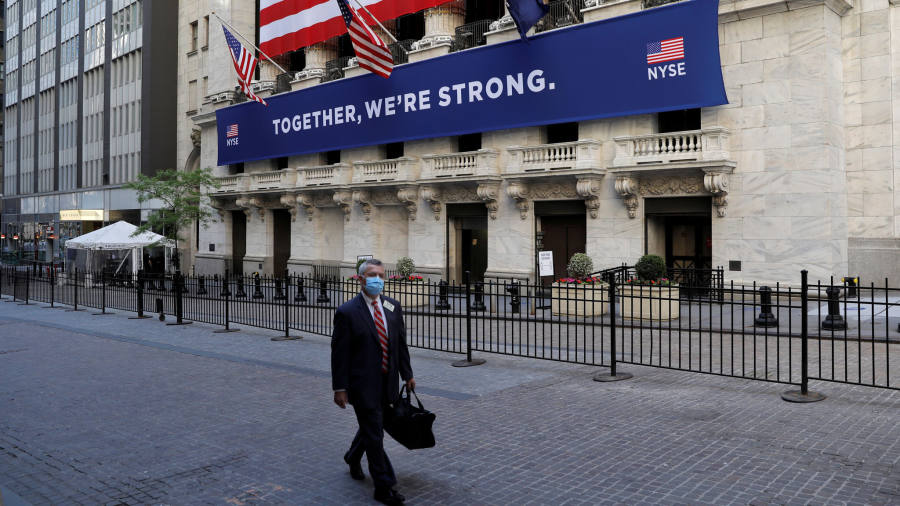 What had been labelled “the most unloved bull market in history” came to an end in March. Equity markets sold off as lockdowns to halt the spread of novel coronavirus were implemented — ending a more than decade-long rise in stock markets following the 2008 financial crisis. Now, however, that unloved market has a rival for the title as equity prices recover in a rally driven as much by extraordinary monetary policy and the absence of decent alternatives to stocks as by optimism over the strength of the recovery.

On Monday, the S&P 500 reached the level it had hit before the drop in prices brought on by coronavirus. Investors in the main US index, in fact, were up on the year. Risk assets generally have done well in recent weeks. European stocks have joined in with the rally as have emerging market currencies: the Brazilian real, the country where the virus is now growing fastest, has gained 20 per cent against the dollar since the middle of May.

The recovery in investors’ appetite for taking risks can be explained in part by encouraging economic news on rich countries’ progress out of the lockdown. US jobs figures, published last Friday, pointed to a decline in the unemployment rate and helped to drive stocks higher. Tentative signs from Europe that a recovery is under way and activity is resuming as economies emerge from deep freeze have provided further evidence for those who argue this is no normal recession.

But there is disappointing data, too, for those who want to focus on it. On Tuesday morning, German figures pointed to the biggest collapse in exports from Europe’s largest economy on record in April, while data from Japan showed orders for new machines fell at their fastest rate in a decade during May. These figures helped to undo some of the previous day’s rise.

The apparent recovery in the jobs data from the US, too, may not fully reflect the reality. The decline in joblessness appears to be solely from those temporarily laid off; permanent unemployment has risen. The Bureau of Labor Statistics suggested that an alternative, higher jobless rate might be more accurate than the headline number.

Yet those sceptical of the rally, and fearful of the emergence of a second wave of infections, have few good alternatives to stocks. Interest rate cuts and quantitative easing have helped to boost stocks but lowered the yield on bonds and cash. Sitting on the sidelines carries a cost.

Government stimulus has played a very important part in fuelling the rally too. Investors are, probably rightly, betting that treasuries and central banks will continue to hose the economy with cash even as economies recover. The French government said on Tuesday that it would continue to provide wage subsidies to companies for the next couple of years. Even without a complete return to work, and with long-term economic scarring from the lockdown, the recovery in markets can be justified given the effects of cheap money from central banks and fiscal stimulus.

All this prevents a challenge to the Federal Reserve, which meets on Wednesday. While it is not the purpose of a central bank to support equity investors, any suggestion that policy will not remain dovish for the foreseeable future could lead to a sell-off. If market optimists are right, however, that suggests the economy will recover quickly and loose policy will not be needed. The best bet for the central bank is simply to ignore the fluctuations in the market: it is far too soon to declare the economic crisis over, whatever equity investors might think.

Russia’s far-east anti-Putin protests: ‘We are the power here’