After Disappointing PMIs, Core Inflation And Personal Consumption Next On Dollar’s Agenda

The Fed’s favourite inflation index will hit the markets on Friday at 12:30 GMT along with personal consumption and income readings. The data could reflect a recovering appetite for consumption which could consequently give some room for improvement to the dollar. However, the gains could be modest as weakness in inflation may suggest more delays in reaching the central bank’s target. Still, upside pressures cannot be ruled out in the years ahead.

Consumers start spending more, but inflation may remain below target

The closely watched core PCE inflation index fell for the third consecutive month to -0.4% month-on-month (m/m%) in April , pressuring the yearly gauge to 1.0% – the smallest increase since 2010 – as the stay-at-home orders hurt demand for goods and services and pushed the world’s largest economy to the brink of an imminent recession.

In May, the government set phase one of its reopening plan in action, allowing 2.5 million people to return to work. Also, claims for unemployment benefits continued to fall on a weekly basis, retracing more than half of the March build up, while overall, the unemployment rate encouragingly did not hit 20.0% as analysts previously believed but eased to 13.3%, flagging that the worst may be behind us.

The positive sentiment further strengthened when retail sales soared by 17.7% m/m last week, posting the largest advance since the government started tracking the data in the 1990s. Now the spotlight is turning to the personal consumption figure due on Friday to add evidence that the massive stimulus delivered by the government and the central bank is indeed working through the economy and thus steering it in the right direction. 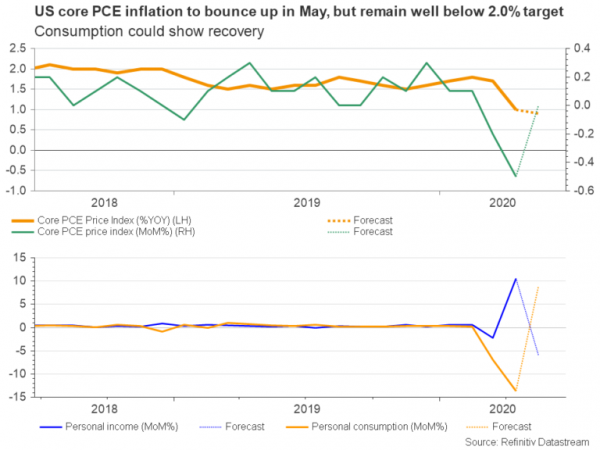 According to forecasts the measure could have surged by a record rate of 9.0% m/m following April’s slump of 13.6%. Nevertheless, inflation may have received a slight boost despite the rising traffic in the shopping area, with forecasts suggesting a poor monthly increase of 0.4 percentage points to 0.0%, while no major changes are expected in the yearly gauge which is projected to inch down to 0.9% and remain well below the Fed’s 2.0% target.

Why is inflation so low?

Two reasons could be behind the muted inflation. Apparently, we are still far away from normal conditions and consumers have not resumed their pre-lockdown spending habits as businesses operate at limited capacity, while the latest peak in covid-19 new cases revealed that a second wave of infections could be more real than markets believe, keeping the cautious mode in play and enhancing savings instead. Secondly, the unemployment rate is still extremely high in several states despite the recent pullback and the government is pushing efforts to subsidize businesses and keep costs and prices low in order to make households feel wealthier. Hopefully, this will motivate consumption which accounts for more than two-thirds of the US economy.

But while there is little optimism for a swell in inflation in the near-term; a view shared by Fed chief Powell, one could say that upside pressures may not take long to emerge on the back of the super accommodative monetary policy and the tremendous government aid. Unlike the 2008/2009 financial crisis, the banking sector is not at the edge of a cliff and is not forced to hold a larger amount of reserves, so banks should be more willing to relax loan terms and fill more pockets with money. Moreover, credit to the non-financial private sector as percentage of GDP remained mostly stable after the fall from the 2008 peak, while projections for the housing sector, which was at the epicentre of the previous financial crisis, remain positive under the current low interest rates and the fact that the unemployment is largely concentrated in low-income workers. A rebound in housing demand was also reported during the past two months. 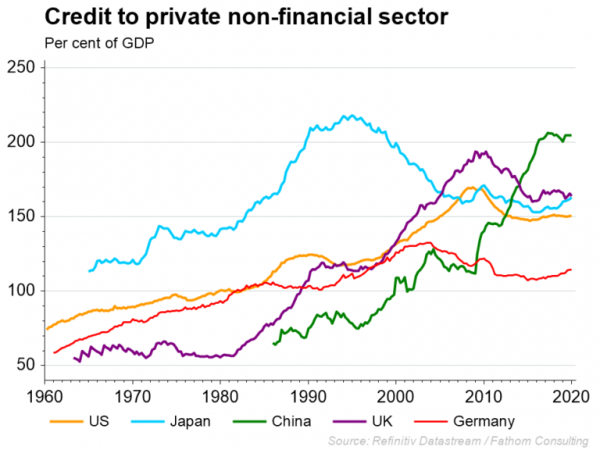 All in all, the trillions of dollars of liquidity injected by the government and the central bank – the largest in US history – is likely to cause higher inflation, though for that to happen consumers should overcome their virus fears while financial support should remain in place to pressure the unemployment rate back towards pre-virus record low levels (probably not this year). Note that the government’s enhanced unemployment payments will run out in July and personal income figures could see a downward reversal in the coming months. In April a dispatch of one-off stimulus checks of $1,200 was mainly responsible for the 10.5% m/m increase in income, and in the absence of it, a decline of 6.0% in May cannot be ruled out.

Where next for dollar?

Turning to the dollar, US flash Markit PMI data saw their second monthly improvement in a row in June, but the increase was not as good as markets hoped, while in the same day another peak in Covid-19 cases moved interest out of the greenback and towards safer assets such as the Japanese yen, forcing USD/JPY to melt towards the 106.00 area. Should inflation and more importantly consumption data fail to show strength on Friday, the sell-off could continue as the technical signals suggest, and it would be interesting to see if the pair can print a lower low below 105.97, changing the short-term outlook to a bearish one. In this case, support could next emerge near 105.00.

Otherwise, if the numbers surprise to the upside, confirming a recovery in consumption, the dollar could rebound to re-test the 20- and 50-day simple moving averages (SMA) currently at 107.60 and 107.40 respectively.

Gold Daily Up But May Close Worst Month Yet

The USD Is Higher But Subtle Pressure Is Still On