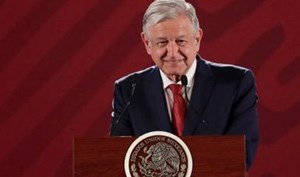 MEXICO CITY (Bloomberg) –Mexican legislators allegedly took bribes to vote in favor of a landmark energy reform during the previous administration, and an ex-head of the country’s oil giant will shed light on the matter, President Andres Manuel Lopez Obrador said on Wednesday.

Lopez Obrador said there was “a lot” of corruption at the state-owned oil company Pemex during the previous administration, when congress passed landmark laws to open the government-run energy sector to private investment. He said Emilio Lozoya, a former head of the producer, will cooperate with investigations once he’s extradited from Spain on corruption charges.

Lopez Obrador has railed against the energy reform since it was first passed in 2013, saying it privatized energy at the expense of the public good. Five years later, as president, he halted auctions of oil blocks and moved to revive the heavily indebted Pemex. Now, the corruption case involving Lozoya has given him a platform to reexamine the reform and may also help boost his ruling party’s campaign ahead of mid-term elections next year.

“There is information that to get the votes for the energy reform there were bribes,” Lopez Obrador, who is known as AMLO, said at his daily media conference, without presenting any proof. “All this must be made known. It is very good that Mr. Lozoya accepted to return and promised to inform on the situation and what happened.”

On Tuesday, Mexico’s attorney general’s office said that it had sent a plane to Madrid to bring Lozoya back to Mexico to face corruption charges. The executive, a longtime confidant of AMLO’s predecessor Enrique Pena Nieto, ran Pemex from late 2012 to early 2016 and has become the most high profile case in Lopez Obrador’s crackdown against corruption.

Lozoya, who will soon be sent to Mexico City from Spain, where he was arrested in February, couldn’t be reached for comment.

Lopez Obrador has seen his popularity slump to the lowest point in his term amid the economic collapse from shutdowns to contain the coronavirus outbreak. While he still has ratings above 50%, his party will be defending it’s majority with political allies in the lower house in elections next year.

Lozoya’s case as well as the pending extradition from the U.S. of a former governor accused of funneling millions to Pena Nieto’s party, will likely feed support for Lopez Obrador’s party, said Rafael Fernandez de Castro, director of the Center for U.S.-Mexico Studies at the University of California in San Diego. He said that AMLO knows this and may bring charges against more former top officials ahead of the elections.

“Lopez Obrador’s anti-corruption crusade is his strongest cause. It has not been so successful since he did not establish a systematic change,” Fernandez de Castro said. “But if it reaches one of the untouchables, the people will love it.”