Anglo American insisted the diamond market was in “a very positive place” despite an earnings slump at its De Beers unit, where staff were briefed on a restructuring of the business that will lead to job losses.

The $80bn diamond industry has been paralysed by the coronavirus pandemic with every part of the supply chain from mines in South Africa, to cutters and polishers in India, to retail stores in New York hit by lockdowns and travel restrictions.

As a result earnings before interest, tax, depreciation and amortisation at De Beers fell to just $2m in the six months to June, down from $518m in the same period a year ago, after selling only $56m worth of diamonds in the second quarter.

However, Mark Cutifani, chief executive of Anglo, said demand was picking up strongly in China, with sales in May and June above 2019 levels, and with supply set to decline 15 per cent to 20 per cent over the next two to three years because of mine closures the fundamentals for diamonds were “strong”.

“The diamond industry structurally is in a very positive place compared to some other commodities,” he said. “If China is an indicator we are in a good place.”

While hailing De Beers as the “best diamond company in the world”, Mr Cutifani said it had not come as far as the rest of Anglo in reducing costs and improving margins, and the business needed to be restructured.

“In our view De Beers has got some work to do and there is no doubt that the current situation is speeding up what we need to do,” he added. 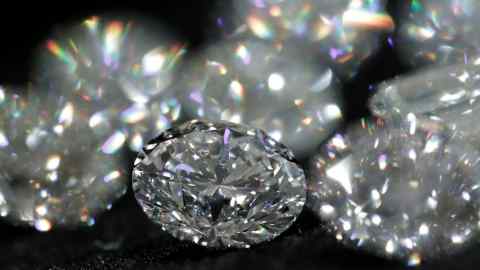 Bruce Cleaver, chief executive of De Beers, said the restructuring plan, under which the company will make greater use of technology to respond to retail trends, would result in job losses, although he declined to give a figure.

“What we are really trying to do is reshape the business end-to-end to be leaner, quicker, more efficient and more digital,” he said.

News of the restructuring came as Anglo reported a 39 per cent drop in half-year earnings, dragged down by De Beers, lockdowns that hit production in South Africa and operational setbacks in platinum and coal.

In the six months to June, underlying earnings before interest, tax, depreciation and amortisation — the measure of profitability tracked by analysts and investors — came in at $3.35bn, down from $5.4bn a year earlier, on revenue that was 12 per cent lower at $12.4bn.

“The year has been like nothing I have ever seen in my 43 years in the industry,” said Mr Cutifani.

Despite the decline in profits, Anglo stuck with its policy of paying out 40 per cent of earnings as a dividend, which more than halved to 28 cents a share.

Net debt hit $7.6bn, up from $4.2bn, driven by an increase in working capital and investment in new mines, including the purchase of Sirius Minerals, developer of a huge fertiliser project in the UK. The collapse in diamond sales resulted in $500m of excess inventories at De Beers.

On Sirius, Mr Cutifani said Anglo would update the market early next year on its development schedule after spending a little more “time and energy” examining the fertiliser market.

U.S. Shares Fall To Low Level At Close of Trade

World Shares Rise To Record High By Close Of Trade