AUDUSD currently looks inactive between the mid-Bollinger band and the 50-period simple moving average (SMA) after pivoting down from a two-month high of 0.6615. The correction from the 17½-year low of 0.5506 also seems to have gradually slowed from the end of April, ahead of the 0.6684 peak.

Additionally, the short-term oscillators mirror the stalled picture and the evaporation of directional momentum. The MACD, in the positive region, has adopted a horizontal tone beneath its red signal line and slightly above zero. The RSI remains at its 50 neutral mark. Nevertheless, price action though flat, remains above the positively charged but converging SMAs.

Should buying interest pick up, immediate resistance may occur from the mid-Bollinger band ahead of the region of highs from 0.6597 to 0.6615, involving the upper Bollinger as well. A push over these borders may then meet another trench of obstacles commencing from 0.6597 to 0.6615, which also involves the 76.4% Fibo. A violation of the 0.6684 mark could restore a neutral bias in the medium-term timeframe and run the price up to the 0.6777 high from January 29.

Summarizing, for now the pair is neutral-to-bullish in the very-short-term timeframe and only a break below 0.6372 could spark doubts in the positive bias. 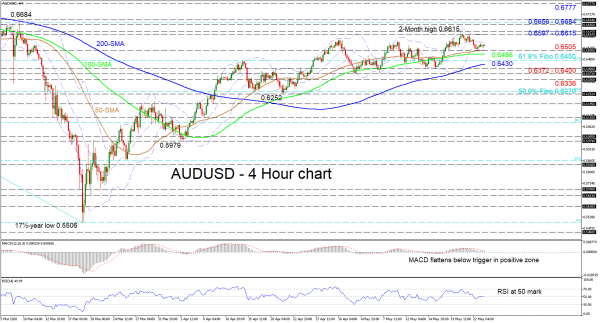 Large Cap Shares And How to Invest In Them

Gold Steady, Above $1,900, In Wake of Declining Dollar