AUDUSD in the near-term is looking mostly directionless as it drifts sideways restricted by the Ichimoku cloud. While the 100- and 200-period simple moving averages (SMAs) back the bigger positive picture, the downward sloping 50-period SMA – which is about to complete a bearish crossover of the 100-period one – promotes upcoming losses.

Furthermore, conflicting signals in directional momentum can be observed by glancing at the short-term oscillators. The MACD, in the negative region, is improving above its red trigger line and is nearing the zero mark, while the RSI points downwards as it rests marginally above its neutral threshold.

If buyers re-emerge, tough resistance may commence from the 50-period SMA until the upper surface of the cloud, coinciding with the swing high at 0.6922. A step above may then test the 0.6976 obstacle reached last week. Should buyers overrun this hurdle, the nearly 11-month high of 0.7064 and the nearby peaks of 0.7081 and 0.7100 could challenge the climb. If gains continue, the pair may extend towards the 0.7139 and 0.7158 peaks from around April of 2019.

Summarizing, for now the short-to-medium-term timeframe holds a neutral tone above 0.6776. Yet, if the price breaks above 0.7064 a bullish bias could unfold. 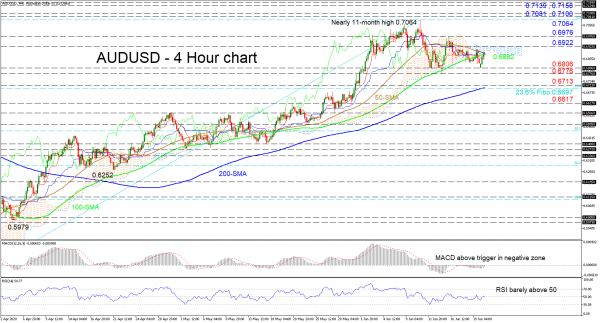 Th DOW Was Higher Today By Close of Trade

Tilray as Well as Other Cannabis Shares Rise