We explained why that decision was led by collectivism and sinister motives. Much has happened since then, and Bitcoin SV literally haunts Binance and its CEO Changpeng Zhao (CZ) like a curse nowadays.

Recently Binance moved into mining and—to the shock of many who suffer from information asymmetry—started to process BSV too.

And not just a little bit: Makes sense, Bitcoin SV is without competition in the digital asset sphere. No wonder people want to mine it.

However, didn’t Binance delist Bitcoin SV for the following reasons they publicly stated back in April 2019? 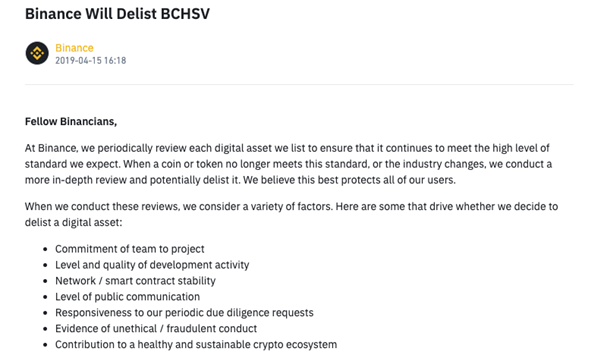 Binance does not list Bitcoin SV (BSV) to be traded on their platform for the reasons shown above, yet it lets its customers mine Bitcoin SV via the Binance mining pool. Binance is inconsistent here.

That is no surprise, as the reasons shown above always seemed made up to hold BSV down. Bitcoin SV is facing a “crypto cartel” and people know about it.

CEO of Binance gets hit by his own weapon

When Binance delisted Bitcoin SV, they kind of used the “crypto Twitter masses” to justify their decision, pretending to be “on the majority’s side” against Bitcoin SV and Dr. Craig Wright.

That worked very well for Binance and especially their CEO back then.

Here comes the joke though: if you use the masses for any goal, you enslave yourself to exactly these masses. CZ from Binance has to wake up to this law of nature now.

CZ’s Twitter followers and customers of Binance publicly ask why Bitcoin SV is being mined by the Binance mining pool now. They see the contradiction and inconsistency. They are outraged.

Binance CEO CZ has to defend himself against his “very own people” now: 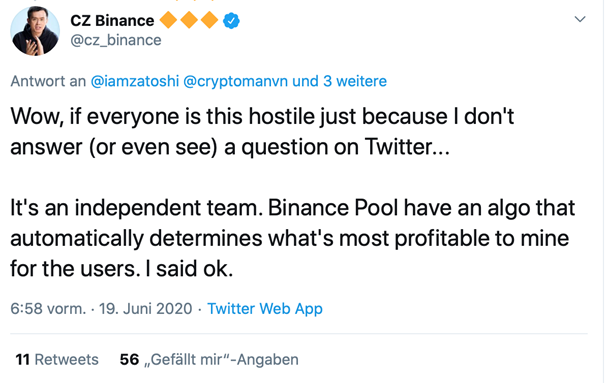 Isn’t he cute in this one? Complaining that people are “hostile”? They start to question Binance and CZ, and they are not amused.

I can tell you why they are hostile, CZ. You told them Bitcoin SV does not meet Binance’s criteria and therefore has to be delisted. But Bitcoin SV is growing and businesses make use of BSV’s capabilities, even world records are being made in BSV. Your customers know of BSV’s success and feel betrayed.

Yes, they are hostile now. They will become more and more hostile, CZ has seen nothing yet.

CZ kind of nurtured this “collectivist crypto space,” now he has to serve his masses and his sheep. You are theirs, CZ, not the other way around. This is what collectivism gets you eventually.

As a customer of Binance, one has to feel betrayed. No opportunity to get into Bitcoin SV via the usual Binance platform, yet having to see successful BSV driven apps like Twetch and TonicPow changing the way people interact and make money on the internet.

People buy nonsense coins on Binance, but are given no chance by Binance to take part in the informational capitalistic society that is forming right now via Bitcoin SV.

Furthermore, the price of Bitcoin SV drastically increased and Binance customers had to watch this rocket take off without them. Traumatic.

I don’t think so and I would not even like it. Bitcoin SV does not need Binance; Binance needs Bitcoin SV.

Their customers get BSV on other platforms easily and do not have to wait for CZ to “I said ok” again like with the mining pool.

Imagine Bitcoin SV suddenly hits a way higher dollar valuation, for example US$1,000 or even US$10,000 per coin. We know how Binance’s customers will react to CZ on Twitter then.

CZ thinks people are hostile towards him now? I say it again: he has seen nothing yet.