Bloomberg: Only a Matter of Time Before Tether Overtakes Ether as #2

A report from Bloomberg that provides a crypto market outlook for June says that it expects Tether (USDT) to surpass Ethereum (ETH) in market capitalization.

The report notes the growth of Tether’s market capitalization as one of the main drivers for the appreciation of Bitcoin (BTC):

“Interest in digital links to the dollar represents the need to transact and store value in the world’s reserve currency without an intermediary.”

Recently, the stablecoin has overtaken XRP (XRP) at the number three cryptocurrency by market cap. Bloomberg asserts that it will not stop there but will march straight pass Ether to the second spot:

“Absent an unlikely reversal in predominant crypto trends, it should be a matter of time until Tether passes Ethereum to take the No. 2 spot in total assets behind Bitcoin. Benefiting from widespread adoption with a viable case as a proxy for the world’s reserve currency, there seems little to stop the increasing adoption of the dollar-linked stable coin.”

At the same time, the report contends that Ether lives in Bitcoin’s shadow and has no buoyancy of its own:

“We see little upside in the ETH price absent a rising tide from Bitcoin. The pre-eminent crypto is breaking away from the pack in terms of adoption and is supported by almost-ideal macroeconomic conditions for stores-of-value amid quantitative easing.”

On the dollar’s shoulders

Despite the massive U.S. stimulus package, the dollar keeps appreciating against other major currencies. As such, stablecoins like Tether that provide access to the dollar are gaining traction as well, the report contends. 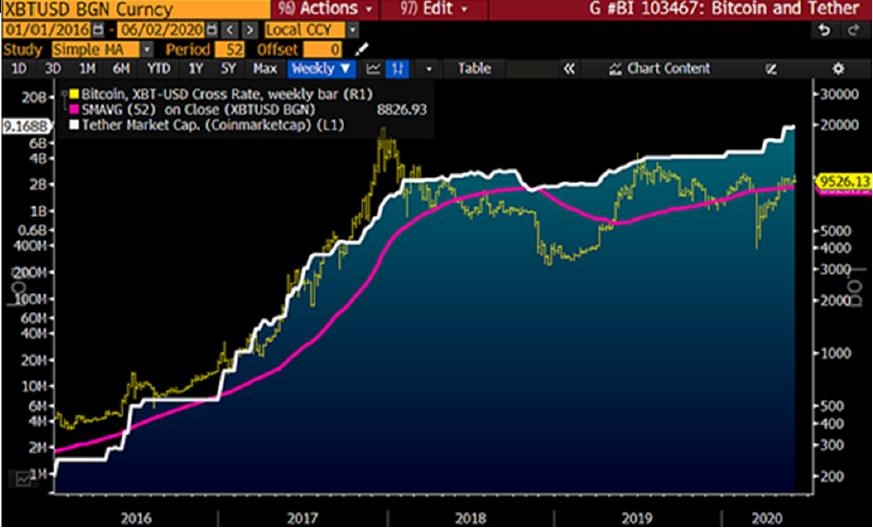 Tether Move Along With The Dollar. Source:  Bloomberg.

Both Bitfinex and Tether have recently been plagued with legal issues that may present a real challenge to its future success.

Dollar Down As Vaccine Hopes Return