Canadian manufacturers were hit hard by physical distancing measures that forced capacity reductions or outright factory closures in April. A 28.5% drop in manufacturing sales was easily the largest on record and quite a bit worse than expected (consensus around -20%). StatCan noted that 85% of establishments said their activities were impacted by COVID-19. The manufacturing sector as a whole was operating at just 56% capacity.

Manufacturers of durable goods (-38%) suffered more than non-durables (-19%), led by the motor vehicle sector where output ground to a halt in April. Auto manufacturing restarted in May but output was still about 3/4 lower than a year earlier. Petroleum manufacturing was also down sharply thanks to a combination of low prices and reduced demand for gasoline as Canadians stayed close to home.

Like many sectors, April should prove the low point for Canadian manufacturing as easing of physical distancing measures allowed some factories to reopen or increase capacity. Hours worked rose 11% in May after a 24% decline in April. But a swift rebound isn’t likely. The latest manufacturing PMI indicated declines in output, new orders and employment were less severe in May than April, but still the second worst in the survey’s 10 year history. Many respondents were concerned that the pandemic would have a long-lasting impact on their operations. 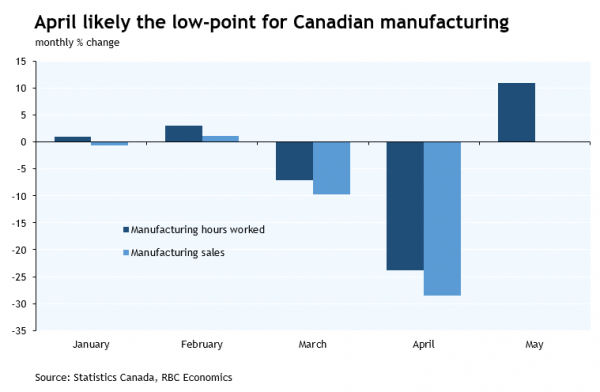