Canadian CPI fell sharply in April, dipping below zero percent year-over-year for the first time since 2009. For a second straight month, a sizeable decline in gasoline prices was a significant driver of the easing in headline inflation. A drop in core inflation was also a factor in April with the ex food and energy index increasing at its slowest rate since 2017 (1.3%). The BoC’s core measures saw a less significant slowing (averaging 1.8%). Softer core inflation was partly due to a record monthly decline in the clothing and footwear component as well as lower prices for traveler accommodation, with businesses in both categories facing a drop-off in demand. Providing some offset to lower core and energy prices, food prices increased sharply amid strong demand and in some cases supply chain disruptions. Prices for household cleaning products and toilet paper—hot commodities in the past two months—also increased.

While store closures presented challenges for collecting price data, StatCan said it was still able to determine prices for 95% of the CPI basket (unavailable items like haircuts and sporting events were essentially left out of the index). However, that doesn’t mean today’s inflation data is an accurate representation of what Canadians are spending their money on right now. Gasoline prices are lower in large part because demand is so weak; lower hotel prices don’t mean much to the vast majority of Canadians that are staying at home. Households have pared back their spending due to a combination of health restrictions and challenging economic conditions. Prices for essentials matter more at this stage, particularly for the millions that have lost their jobs or seen their hours cut back. In that sense, an increase in food prices in April likely hurts more than a drop in gasoline prices helps.

The Bank of Canada’s current focus continues to be ensuring the smooth functioning of the financial system. But as the great re-opening continues and the economy enters recovery mode, the BoC’s focus will shift to supporting growth and returning inflation to its 2% target. While there’s no shortage of uncertainty regarding the future path for the economy and inflation, we expect an ongoing shortfall in demand will keep inflation below 2% even as the effect of lower energy prices fades. That should necessitate ongoing stimulus from the BoC, including an extended period of low interest rates and even more quantitative easing. 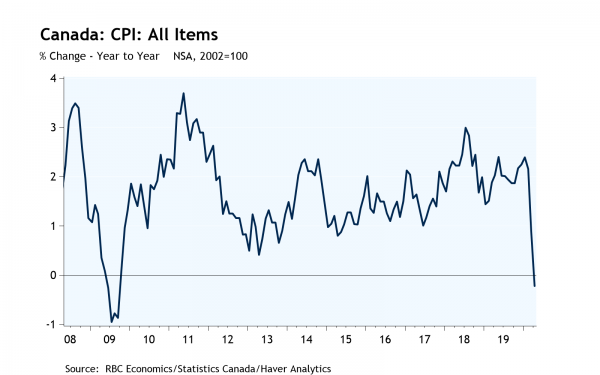