Canadian Employment Fell off the Charts in April

It is perhaps a mark of the unprecedented economic shock under way that a 2 million drop in employment proved to be a substantial upside surprise – but reports that more than 7 million people had applied for EI and the new CERB program had set expectations for a drop twice or more that big. The employment drop itself is, of course, still bad news – and is unprecedented historically. The unemployment rate still hit its highest level since the early 1980s and still would have been much higher if a large share of workers put on permanent layoff were looking for work. Compared to a year ago, there were 1.5 million more workers on permanent layoff not looking for work in April – and so not counted as unemployed. And hours worked plunged another 15%, matching the March drop and confirming an unprecedented 2-month decline in economic activity over that period. Layoffs were also more widespread by industry than in March – the goods sector accounted for almost a third of job losses in April compared to just 4 1/2% the prior month. But job losses were also still weighted, on balance, more heavily in lower-wage jobs. Average wage growth for those remaining in employment spiked sharply higher as a result, to 11% above year ago levels.

As ugly as the economic data is going to look for April, there are also some green shoots to suggest that we are at least approaching the bottom of the downturn. Business sentiment appears to have improved somewhat towards the end of the month in data from the Canadian Federation of Independent Business. Our own tracking of credit card spending data looked less weak at end of April. Housing starts for April, also reported this morning, held up better than expected. And, perhaps most importantly, the spread of the coronavirus has eased and regions are starting to relax some social/physical distancing rules. We continue to look for an unprecedentedly large drop in activity in Q2 but look for the recovery, at least in monthly GDP terms, to start as soon as May. 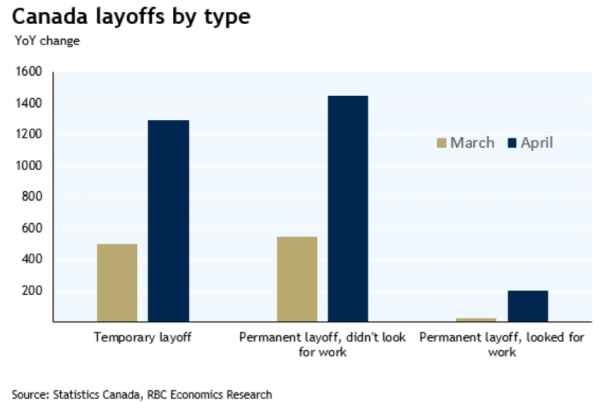 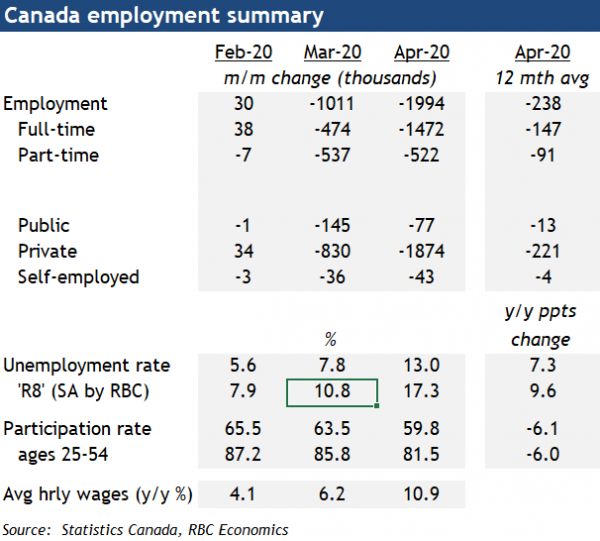 Oil Drops Toward $39 on Rising and Stimulus Stalemate

USD Hold On To Largest Gains In Over Two Years

Tesla Beats S&P And DOW In Market Today At Close