Canadian housing starts bounced back to 193.5K in May after falling to 166.5K in April. Starts in Quebec urban areas jumped to 56K (and 61K including rural areas) after dropping to zero in April when COVID-19 containment measures effectively shut down new builds in that province. Excluding Quebec, starts fell by 20% in May after a surprising 11% increase in April that was in sharp contrast to dramatic pullbacks in virtually all other economic indicators that month.

The 6-month rolling average of starts has still slowed year-to-date, but the both the level of that average in May (197k) and the reading for the latest month look decidedly more ‘normal’ than most other readings on the economy. The fact that residential construction activity has been more resilient in the near-term than the rest of the economy itself is not so surprising – this has been a very different economic downturn, led by the effective shutdown of wide swaths of the normally resilient service sector via social/physical distancing rules rather than a more typical demand-led softening in the goods-producing side of the economy.

But the magnitude of the resilience in housing starts is still surprising. There are still significant go-forward risks for residential building activity. Home resales have plunged. Labour markets are still exceptionally soft despite an increase in May employment , and we expect the unemployment rate to remain elevated even once exceptional government income supports for those losing work due to COVID-19 are set to expire. And that means some of the weakness in near-term economic indicators that would normally be expected might not show up until later this year. Still, housing starts are just the latest in a string of economic indicators that have looked less-bad than expected over the last month. The broader economic recovery is still likely to be gradual – mirroring gradual expected easing in social/physical distancing rules. But the recent near-term data flow has clearly been less discouraging than was expected even a few weeks ago. 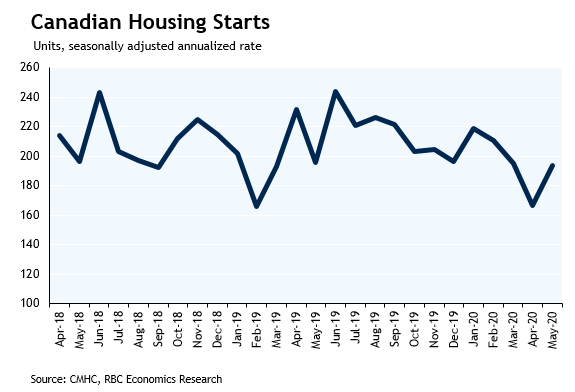 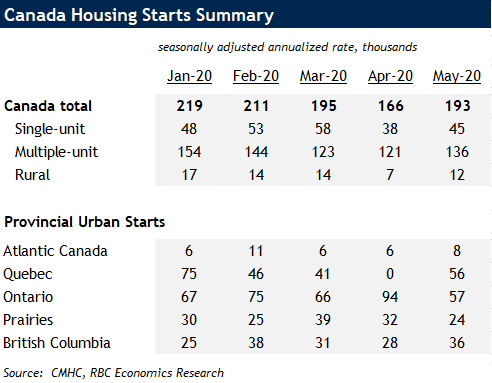 Eventbrite Searches For Tech Co. to Merge With