Charting a Course for Recovery

While it’s too early to declare victory against COVID-19, the economic downturn that came along with aggressive containment measures in a large number of developed countries appears to have bottomed.

The slowing in the number of new cases has allowed many countries to start the long process of reopening their economies. This is a positive development but the severe damage wreaked on the global economy over the space of just the past few months and uncertainty regarding the ability to keep the virus at bay means 2020 will mark a year of unprecedented decline. The world economy is projected to contract by 3% this year, a record-breaking drop and a significantly worse outcome than during the Global Financial Crisis.

Policymakers acted aggressively to combat the threat from COVID-19 to the health of their citizens with policies that stopped human interaction in areas outside essential services. The impact on economic activity was swift and broadly based resulting in double-digit declines in output and millions of lost jobs. In the Euro-area, UK, US and Canada measures to contain the virus that were unveiled in the second half of March were powerful enough to drive growth rates into negative territory in the first quarter and set up for much larger declines in the second. By May, many of these countries were in position to relax some of the lockdown measures but progress to the new post-COVID-19 normal will be calculated and slow. 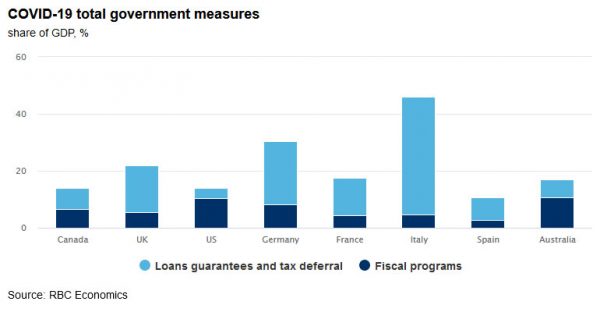 Outside of aid to fight the pandemic, governments and central banks have provided extraordinary support to help economies manage through the crisis. Governments unleashed a torrent of spending as well as loans and guarantees in amounts ranging from 15% to 45% of GDP while central banks cut policy rates to record low levels and expanded their balance sheets to ensure financial markets remain liquid and funds available to borrowers. These policies acted as a bridge for households and businesses to weather the downturn. Many will need to be maintained to ensure the recovery stays on track even after the threat from the virus on people’s health dissipates. 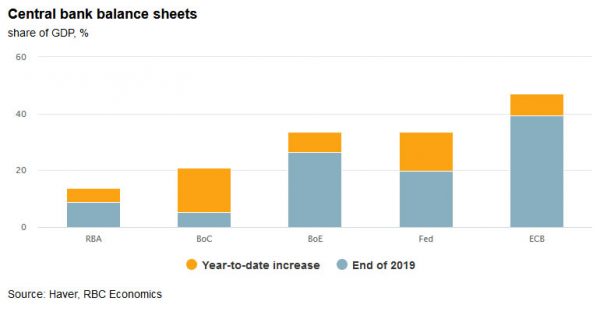 The US economy contracted at a 5% annualized pace in the first quarter, a stunning loss given most measures to combat the virus were only put in place in the latter half of March. April’s reports were much worse with 20 million jobs lost, massive declines in household spending and a slump in business activity. With many US states easing restrictions in May, the economic data began to turn. The combination of a surprising increase in employment, a rise in auto sales and stronger readings of business activity suggests that the economy hit bottom in April. While the May reports were good news, they also served to drive home the depth of the destruction to the economy that occurred in March and April. Even with the 2.5 million jobs recreated in May, there were closer to 20 million fewer workers on payrolls than before the crisis and the unemployment rate, at 13.3%, was the second highest level on record since the great depression next to April’s 14.7%. The labour market recovery will continue at a slow pace with policies like social distancing to remain in place until a vaccine or more effective treatment is developed and delivered across the country. This slow progression will mean that sales activity won’t return to pre-crisis levels this year and that investment activity will be limited. Even with activity starting to come back on line in May, we expect real GDP to fall at a 35% annualized pace in the second quarter before staging a partial recovery in the second half of the year. On net, this will leave US economy about 5% smaller than in late 2019.

Low rates, government spending bridge economy to other side of crisis

The combination of aggressive policy actions by the US government and central bank prevented an even deeper downturn, and will be critical for the economy to stay on the path to recovery. Generous government support programs helped households and business get through the worst of the crisis. US household incomes jumped 10% in April despite the massive jobs decline with offsetting support from government payments. The US Federal Reserve cut interest rates to rock-bottom levels and instituted programs aimed at ensuring borrowers had access to credit. As the economy gradually reopens, governments will need to shift the focus from providing relief to supporting the expansion. For its part, the Federal Reserve will need to keep borrowing costs low for an extended period. With these supports in place, we expect the economy will grow at double-digit rates in the second half of the year. 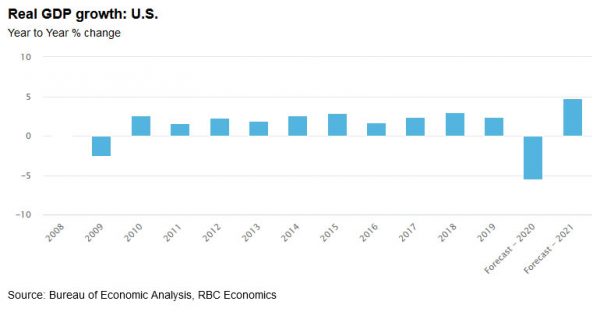 Canada emerging from the depths

Canada also turned the corner in May as the number of new infections slowed and parts of the economy reopened. Losses in output in March and April were unprecedented and created a large chasm which is unlikely to be filled even as the economy grows in the second half of the year. Like the US, we expect Canada’s GDP will end the year more than 5% lower than in late 2019.

Canada’s labour market improved in May with employment rising by 290,000, a positive step but only amounting to 10% of the jobs lost in March and April. As Canadians re-entered the labour force, the unemployment rate rose to a record high. Consumer spending, home resales and measures of business sentiment also improved in May albeit from unprecedented lows. While the May data was encouraging, the recovery will remain slow and depend on continued progress on curbing the rate of infections.

After falling at an 8.2% annualized pace in the first quarter the economy is likely to record a jaw-dropping 32% annualized decline in the second quarter. Our forecast assumes a gradual pickup in activity in the second half of the year as operations come back on line. Government programs that helped business and households navigate the darkest days of the downturn will now act to facilitate the re-entry of workers. Low interest rates and access to credit will also be instrumental in guiding the economy back to health. We look for the recovery to be gradual and uneven with some industries, like energy, hospitality and tourism, remaining weak well into 2021.

The severity of the downturn will leave Canada’s economy running significantly below potential at the end of 2020. Even as more people return to work, the unemployment rate will remain elevated relative to where it was before the health crisis. Global demand for Canadian exports, including energy, will also remain subpar weighing on business investment. Consumers are also likely to remain hesitant and will face challenges once payments that were deferred during the crisis need to be paid. Low levels of immigration (another byproduct of the crisis), and an elevated unemployment rate will likely curb the rebound in the housing market with sales likely to fall by almost 20% and prices, which have held up well so far, likely to come under stronger downward pressure over the second half of the year.

Tilray as Well as Other Cannabis Shares Rise