The Dove pub in west London could only squeeze four people inside — and that was before coronavirus. The coziness that was once a blessing for the smallest public bar in Britain is now a curse.

With the government requiring that customers stay two metres apart when England’s pubs reopen on July 4, the doors of The Dove, which is owned by Fuller’s, one of the biggest operators, will remain firmly closed.

But tens of thousands of other pubs will embark on a balancing act laced with danger: how to get enough customers through the door, keep them safely apart and, at the same time, serve them alcohol.

“The only way it would happen is if I employ 20 staff on every single point to watch everyone,” he explains. “After a few drinks everyone wants to sit together.”

The commercial pressures to release the £23bn industry from lockdown are building. It employs about 900,000 people and, according to the British Beer and Pub Association, is burning through about £100m a month.

As the industry prepares to start trading in England, the lessons from Europe, where bars and pubs welcomed customers back several weeks ago, make clear the challenge in striking the balance between public safety and making money.

Raffaele Tenuta, the owner of Ivy, a bar on the Corso Trieste in Rome, said that after a cautious first week of trading, his customers are quickly returning to pre-pandemic habits.

“We’re now at a point where the customers’ mood has gone back to pre-Covid-19,” he said. “We’re the ones who remind them to wear face masks when they come up to the counter or to the till to pay for their bill.”

In common with Denmark, France and Lithuania, Italy requires customers to keep just one metre apart, in keeping with the recommendations from the World Health Organization. A cocktail bar in Berlin last week. Surveys show that just one in three Germans plan to go for a night out in the next month © Carsten Koall/dpa

Back in Britain, the one-metre versus two-metre debate has turned into one of the most explosive thrown up by the pandemic. Since early May, the pubs industry has lobbied the government to adopt a one-metre rule. The BBPA estimates that at two metres only a third of the UK’s 67,000 pubs can open, but at one metre the proportion jumps to at least two-thirds.

If the industry is required to adhere to the two-metre rule, say pub owners, it would cut the number of customers inside pubs by as much as three-quarters at some sites. The decision on which pubs to open is “unbelievably difficult”, added Mr Emeny.

Patrick Dardis, chief executive of rival pub operator Young’s, has already made his decision. The group, which has 276 pubs, will not open any of them until August 3 when he expects the two-metre rule to have been relaxed. There would be “devastation” if it were not, he warned. 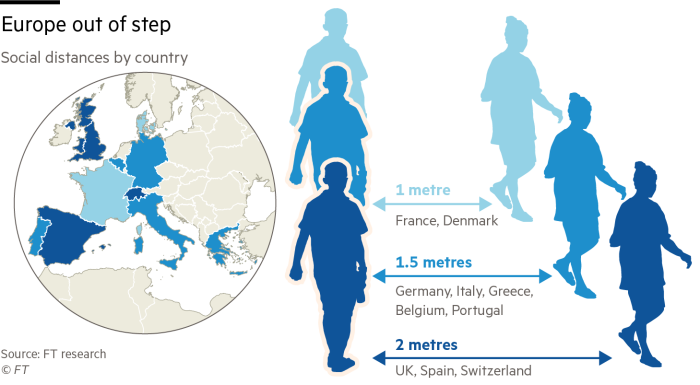 If the chief of Young’s is worried about how many customers he will allowed to welcome back, operators of German pubs and bars point to another hurdle: will drinkers want to return?

According to Julius Wagner, who heads the German state of Hesse’s hotel and restaurant association, just three-quarters of pubs have reopened since they were permitted to in the middle of last month. They must keep customers 1.5 metres apart and, in some regions, sharing a table is limited to people from only two different households.

Tobias Jäkel, co-owner of Henninger am Turm, a spacious brewery pub in Frankfurt, said that people were “still massively worried [about the infection risk],” pointing to surveys showing that just one in three Germans plan to go for a night out in the next month.

Despite a large garden area, the pub is only generating about 50 per cent of its normal revenue. Mr Wagner said that trading was low at those venues without outdoor space as customers remained wary about gathering indoors.

The fear is echoed by research for the UK hospitality industry from Trajectory Partnership. “We know that currently 13 per cent of people who were frequent pub and bar goers are not going to go back,” said Paul Flatters, chief executive of Trajectory. About a fifth of customers will go less often, Trajectory’s research indicates. 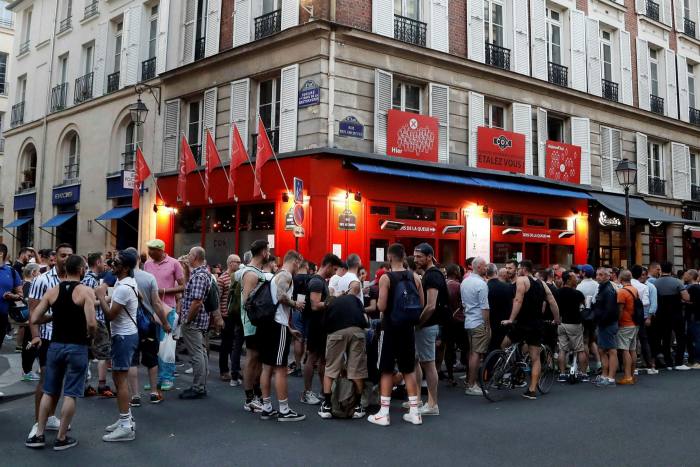 People queueing and drinking outside a bar in Paris last week. Customers are not allowed to stand in re-opened bars in France © AFP via Getty Images

The experience of France, where customers are not allowed to stand in bars, shows that having outside space brings its own headaches. In Paris regulations over pavements and parking lots have been eased so bars can make use of them, but the furniture has to be removed each night.

“Parking spots have become as valuable as diamonds,” joked Guillaume Quenza, co-owner of a cocktail bar called Fréquence in Paris. “We’re going to have to get there early every day to stalk them.”

Indeed, the European reopening underlines how demanding it is likely to be for employees in the UK industry. In Oslo, for example, alcohol was banned for two months after tipsy Norwegians failed to stick to social-distancing measures.

“If one group [of customers] is loud, that means other tables will be loud and everyone will lean in to each other to hear better, and spit more,” she said.

The UK government has insisted that the planned reopening on July 4 was dependent on the infection rate. This week, Prime Minister Boris Johnson warned that “what we don’t want to see is a roiling, bacchanalian mass of people that can spread the disease”.

That is precisely the fear of some publicans who are concerned they will be blamed if the infection rate spikes following the reopening.

“You throw alcohol into the mix and you don’t need a social scientist to tell you how alcohol affects people’s behaviour,” said Trajectory’s Mr Flatters.

But Mr Emeny of Fuller’s insisted the industry was “used to dealing with drunk customers”. “I don’t think that will be any different” once pubs reopened, he said.

Gold Completely Shut Down At $1,790 Today