A woman in a wheelchair and her companion approach the entrance to John Lewis in Kingston, south-east England. But they are not customers. They are staff, rehearsing how the department store will interact with shoppers on Monday when it open its doors for the first time since the country’s unprecedented lockdown began.

Each staff member has been given a “secret mission”, explains store manager Jill Dewar, such as returning an item or seeking technical support for a laptop. Like the customers that John Lewis hopes will return next week, they are met by “greeters” on arrival who ask them to sanitise their hands, inform them of the social-distancing rules in the stores, and warn them if the part of the store they are planning to visit is already full.

Thousands of stores will reopen to the public on Monday after the government gave the green light to most “non-essential” retailers in England to begin trading again from June 15. Yet many face uncertainty over how shoppers will feel about returning to potentially crowded areas. Consumer behaviour is set to be a crucial factor in the health of the high street for the rest of the year.

Covid-19 has cost the industry about £1.8bn a week in lost sales, according to the British Retail Consortium, and compounded the damage already inflicted on high streets in recent years from a shift towards more ecommerce. Complying with social-distancing rules will put further pressure on already thin profit margins.

The sales floor at John Lewis’s Kingston branch looks remarkably normal, but on closer inspection the changes are evident. There are Plexiglas screens at the checkouts, social-distancing reminders every few metres and the fitting rooms and cafés are closed. There will be no make-up demonstrations or personal styling sessions.

And the trappings of the Covid era are everywhere: disposable gloves and hand sanitisers at the checkouts, and boxes of pop-socks in the footwear department so customers can try on shoes safely.

Restarting a store this size is a substantial undertaking. It has taken three weeks just to remove the dust sheets from furniture and clothing, deep-clean the store, move high-value electrical goods back into place, train staff and restart the air conditioning. An app keeps greeters in touch with colleagues at the exits, allowing the company to keep customer numbers in the 150,000 sq ft store at 270. 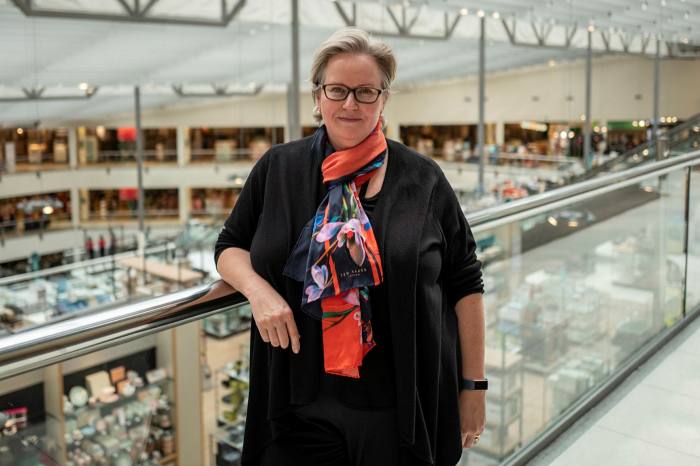 Managing numbers is a key plank of the government’s guidance to retailers ahead of the reopening. It is regarded as far more effective than personal protective equipment such as face masks.

But unlike many countries, it has not specified a hard-and-fast ratio — leaving retailers to decide for themselves what level is appropriate to preserve social distancing.

The chief executive of one leading fashion chain said that each store would be introducing a different square footage per customer, based on its layout and location. “Our sense is that on most trading days it will not be a problem [in terms of limiting capacity] . . . the shops never feel that full except in the run-up to Christmas.”

James Daunt, chief executive of Waterstones, is using Germany’s ratio — six customers per 1,000 sq ft — as a starting point. He and others point out hopefully that in Europe, lower shopper numbers have so far been partly offset by higher average transaction sizes.

But even if this trend endures, no one expects it to offset the impact of the pandemic. Retail Economics, a consultancy, expects non-food retail sales to fall by 16.3 per cent this year — with fashion, homewares and furniture particularly badly hit.

Those who operate smaller stores, or depend on high sales densities, are backing the hospitality industry’s call for the government to relax its two-metre distancing rule to just one metre, a measure favoured by some other countries.

“It would certainly help us,” said Gavin Peck, chief executive of The Works, which has 465 stores in England and Ireland, mainly in town centres. “It’s something the industry and the government will need to think about ahead of Christmas.” 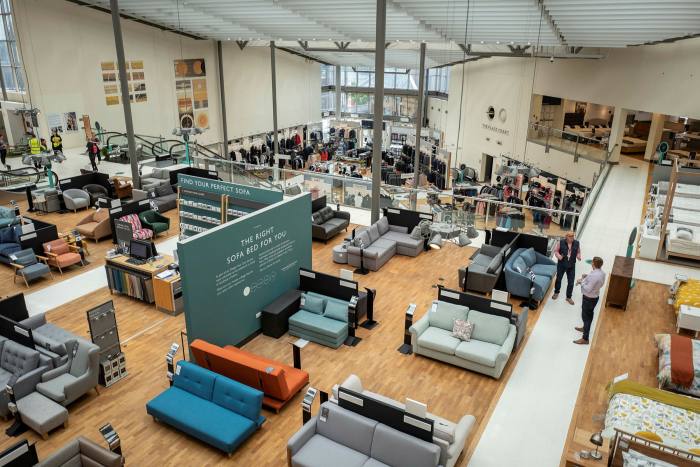 Paul Martin, head of retail at KPMG, said that faced with such constraints, along with uncertainty over consumer spending, some stores “may not even reopen at all” and predicts that retailers will use phased reopenings to “reassess which sites are most commercially viable”.

The staff manning the entrances and exits in Kingston are not the only ones who will be performing unfamiliar roles from Monday. Ms Dewar said between 10 and 15 partners would be on constant cleaning patrol, sanitising “high-touch” areas such as escalator handrails, lift buttons and chip-and-pin keypads. Most retailers are unwilling to disclose the costs of reopening in this way. But Neil Clifford, chief executive of Kurt Geiger, said the upmarket fashion chain had spent £5m preparing its stores for reopening.

Limits on capacity and the redeployment of staff to activities like cleaning and greeting will affect productivity. The appetite of consumers and their spending power are relatively untested.

The sheer number of unknowns has led many retailers to take a cautious approach to reopening. Kingston is just one of two John Lewis branches — out of 50 — that will reopen on Monday. “If for whatever reason things don’t go to plan and we have to close again, we will,” said Ms Dewar. Staff do not have to wear face coverings but masks — manufactured by the group’s in-house supplier of curtains and duvets — are available for those who wish to. Surveys indicated that the majority of staff were happy with the preparations, Ms Dewar said.

And customers have a sale to look forward to. John Lewis will start its usual mid-season clearance on Monday and plenty of lines, particularly in fashion, are discounted.

But Lisa Hooker, head of consumer markets at PwC, said it was “unlikely that customers will see wall-to-wall sales”, adding that retailers cleared stock online throughout May.

“It’s possible that pent-up consumer demand may in fact lead to good news for retailers trying to preserve margins,” she said. “But if June trading does not make a big enough dent in stocks, we predict a rush of promotions and sales later in the summer.”

With small stores and transaction values typically below £10, discount retailer The Works is especially constrained by social distancing. In many locations, only seven or eight customers will be able to browse through its “beat the boredom” ranges of crafts, puzzles and books at any one time — and they will be asked to handle only things they intend to buy.

Chief executive Gavin Peck is looking at extending trading hours, improving the click-and-collect process and selling more online in order to ease the pressure on stores. And if customers and staff will tolerate it, he could allow more people into stores. “We have been very cautious from day one, but we may look at relaxing that,” he said.

Meanwhile, mobile network O2 is using an app to control admissions to its stores, many of which are small. Customers in a virtual queue receive a text message when it is their turn.

Sales manager Gareth Turpin is also providing staff with masks and gloves, and visors for those dealing with customers, despite government guidance discouraging personal protection equipment. “Our stores are very much an interactive environment,” he said, with advisers constantly talking to customers and handling devices.

Furniture and demonstration devices would be sanitised after every customer visit, he added. Services such as data transfer and loan phones will not be available.