EURGBP Flirts with Head and Shoulders Pattern in Short Term

EURGBP has been in a head and shoulders pattern over the last three weeks and a close below the neckline of the 0.8860 support could endorse this formation, suggesting a downside movement. The 20- and 40-period simple moving averages (SMAs) are acting as strong resistance lines for the bulls and the RSI is moving marginally below the 50 level. Also, the stochastic oscillator is heading south moving towards the oversold zone.

On the other hand, an increase above the 40-period SMA could meet the Ichimoku cloud and the flat blue Kijun-sen line currently at 0.8935. Above that, the upper surface of the cloud, which overlaps with the 23.6% Fibo of 0.8663, could attract attention ahead of the 0.9000 round number.

Concluding, EURGBP is in a neutral mode since the direction is not clear in the 4-hour chart. A dip beneath 0.8860 could take the price further south. 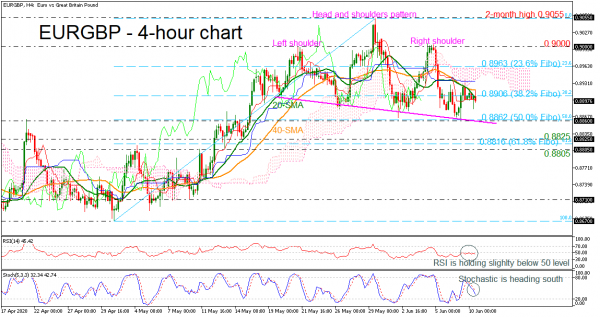 US: Only Minor Revisions to Q1’s Contraction; Corporate Profits See Biggest Decline Since the Financial Crisis