EURUSD has come under intensifying negative stresses, which may see selling threats materialize. Even though the price had found a foothold on the 100-period simple moving average (SMA), the lower bound of the Ichimoku cloud at 1.1268 has capped upside moves – the level being the 23.6% Fibonacci retracement of the up leg from 1.0773 to 1.1421.

The convergence in the rising 100-period SMA and the slipping 50-period SMA, plus the stall in the negatively charged Ichimoku lines could force the price to edge sideways for a while. That said signs of growing negative momentum exist in the short-term oscillators. The MACD holds below its red signal line in the negative zone, while the RSI dips lower in bearish territory. Furthermore, the stochastics improving picture looks to be turning negative as the % K turns back down.

In brief, the short-term bias remains neutral-to-bullish above 1.1194 and a break above 1.1421 would be required to revive the hike in the pair. 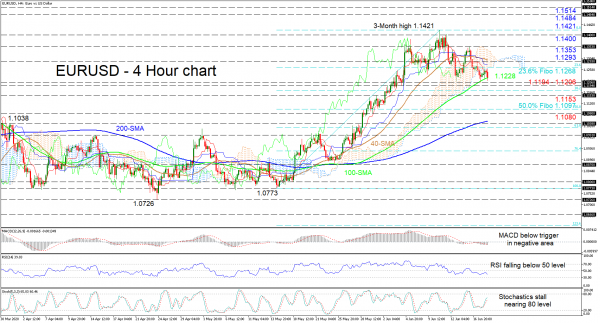 US ISM non-manufacturing rose to 45.4, corresponds to -1.1% annualized fall in GDP