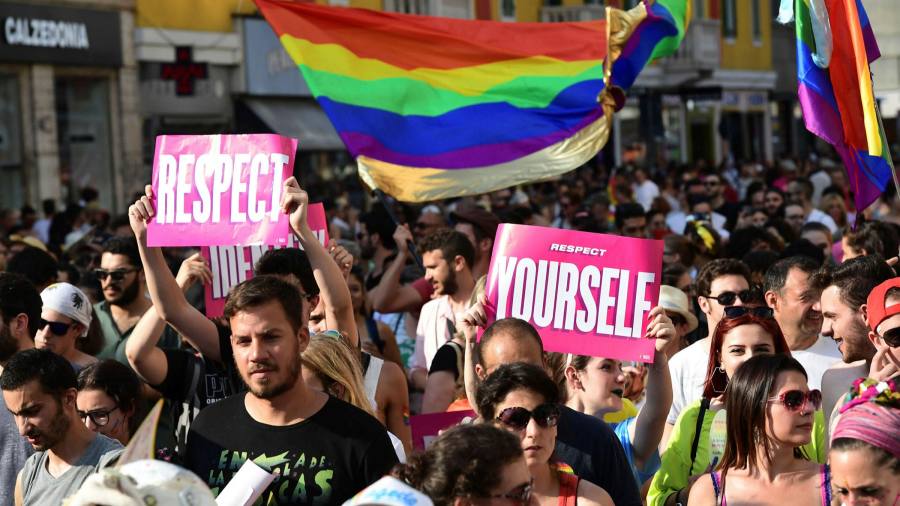 Three weeks on from the brutal attack in the Italian city of Pescara that left a young gay man needing reconstructive facial surgery, Lorenzo has joined a small gathering on the busy waterfront to demand justice.

“After what happened, no one in the LGBT community feels able to walk freely,” said Lorenzo, holding the rainbow tote bag he bought at last month’s gay pride event, Pescara’s first. “The sense is that there could be aggression at any time. Everyone feels threatened,” added the 33-year-old, who asked for his surname not to be used.

The circumstances of last month’s attack are still being investigated but, according to news reports, a group of seven individuals attacked the 25-year-old victim as he walked with his boyfriend. The young man was punched repeatedly and so violently that his jaw was smashed and had to be rebuilt using titanium.

One possible suspect has been identified but Lorenzo said he still felt scared: “These streets are soaked with prejudice.”

Unlike other European countries, such as France and the UK, Italy lags behind in moving towards equal treatment of LGBT people. Despite an existing law that punishes crimes committed because of discrimination on racial or religious grounds, there is no specific protection based on sexual orientation, gender and gender identity.

Italian lawmakers are set to submit draft legislation by the end of the month that would amend the anti-discrimination law. While the proposal would explicitly recognise discrimination against women as well as homosexuals and transsexuals, it is the fight over LGBT rights that has divided Italy.

Alessandro Zan, the centre-left MP who has championed the law change, said there was an urgent need for Italy to align itself with its western European counterparts to protect all citizens.

“Homophobia is widespread across the country — even if it’s often hidden. It emerges every time gay, lesbian and transsexual men and women try to live openly,” Mr Zan said.

Monica Cirinnà, a senator from the centre-left Democratic party (PD), said the fact that the country was still debating rights that other western countries had already embraced underscored the conservatism ingrained in Italian society.

“Italy has been reluctant to embrace diversity because people are pigeonholed in gender stereotypes due to a mixture of deeply rooted patriarchal and Catholic culture,” she said. “When you don’t fit into one of these stereotypes, you’re to be feared or kept away. But it’s time to move on,” she added.

A Eurobarometer survey, published in September, showed that acceptance of LGBT people in Italy was well below the European average. While 90 per cent of people in Sweden and 93 per cent in the Netherlands were comfortable with a gay, lesbian or bisexual person in the country’s highest elected office, in Italy the figure was 55 per cent.

The debate over LGBT rights has become entangled in the wider battle between the PD, part of the ruling government coalition, that is pushing for the change and opposing conservative and religious forces led by Matteo Salvini’s far-right League and Giorgia Meloni’s Brothers of Italy.

The far-right has taken a strong stance against the proposed law change and the extension of LGBT rights, joined by powerful religious movements and Catholic bishops who have a strong influence on national politics.

“In Italy there is no discrimination . . . if an homosexual or heterosexual is beaten up or discriminated against, there is no difference, the solution is the same: jail,” Mr Salvini said at a press conference this month. “If there were any difference, why don’t we introduce a bill against heterophobia?”

Jacopo Coghe, president of Pro Life and Family, a conservative organisation that is mobilising supporters to resist the anti-discrimination law, said: “We don’t understand why some have to be more equal than others. The addition of gender or sexual orientation offences [in the law] would create discrimination against all the others.”

This is “manipulation to impose a certain culture”, he added, suggesting it would lead to the promotion of homosexuality in schools.

The Italian conference of bishops said that if the proposal was put into law it would be “the death of liberty”. Pope Francis, who has been known to take liberal views on social issues, has been noticeably silent on the issue.

If approved, the law change would mark a historic success for LGBT rights proponents on the left who has been trying to push the bill forward for 25 years.

Italy allowed same-sex couples to enter into civil unions for the first time in 2016, bringing the county’s laws on same-sex unions closer into line with those of other major western European countries, although gay marriage is still not permitted.

“Thanks to civil unions, LGBT people in Italy have finally become visible, in a society that until then had totally rejected them,” said Simone Alliva, author of Hunting Homos, a book examining homophobic attacks in Italy.

“But episodes of violence have also become more evident and barbaric, as proof that Italian society doesn’t have all the tools to accept diversity yet,” he added.

Back at the gathering on Pescara’s waterfront, Sonia Di Stefano, a 26-year-old designer, was adamant that a law change to protect women and LGBT people in Italy from hate crime was long overdue.

“We live in a world made for straight, white males. As long as I remember, I’ve never seen anyone with these features being discriminated against for who they are or what they represented,” she said.

Asian Shares Down On U.K. Lockdowns For COVID

USD Up Amid Shaky Stimulus Talks in The U.S.

USD Rises As The Turkish Lira Is Hit Hard Today