Growing evidence that the recovery began in May is taking some sting out of April data that undershot already grim projections. US retail sales jumped 18% in May – still down 6% from a year ago but significantly better than feared at this point. Statistics Canada reported a similar-sized 19% increase in a preliminary estimate of May retail sales in Canada. Canadian home resales increased 57% during the month and auto sales more than doubled. In each of those cases, activity is still down sharply from a year ago, though with all regions continuing to gradually ease virus containment measures, spending probably continued to rise into June.

This brighter news follows a devastating April where activity looks to have been even slower than previously expected. Canadian retail, wholesale, and manufacturing sales all fell more than 20% in April – data that is tracking downside risk to Statistics Canada’s earlier advance estimate that GDP declined (a new record) 11% in that month to build on a 7% pullback in March.

But the silver lining is that the initial bounce-back also looks stronger than most were expecting even a month ago. 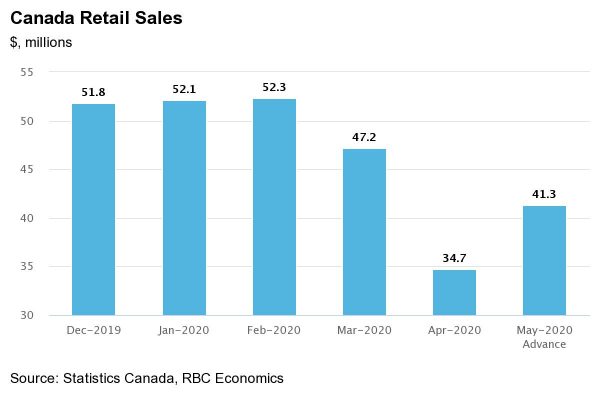 Not all May reports have been so positive. US manufacturing output edged up just 4% in May. And US industry is, as always, crucial to the battered Canadian manufacturing sector due to tight cross-border production chain linkages.

Look for next week’s advance PMI reports for an early read on June business confidence in the US and Europe (not, unfortunately, in Canada where an advance estimate is not available). Early indicators, including a sharp improvement in the PMI-style Philly Fed Business index for June in the week past, are signalling further improvement. And, in Canada, hours worked by manufacturing employees were up 11% from April lows by mid-May.

Meantime, China’s April industrial output and electricity consumption were both back above year-ago levels in April and May just 2 months after peak virus containment measures there.

On both sides of the border, stronger-than-expected early signs of life in May economic data is at least partly due to unprecedented government household income supports. In the United States, household income increased 10% in April despite a previously unthinkable 21 million drop in employment in the month. In Canada, payments under the CERB program alone totalled a whopping $43 billion as of early June.

Earlier labour force survey data already showed that employment in Canada reversed about 10% of the 3 million in job losses in March and April in May. But payroll employment numbers for April in the week ahead – covering the softest month for employment in history (a 2 million pullback) – should also confirm that job losses were heavily concentrated in lower-paid hourly positions, for which CERB payments are a more significant (in some cases full or more) income offset.

To be sure, the economic recovery will not be quick. Labour markets are still exceptionally soft and containment measures will not be fully eased until there is a vaccine or more effective treatment. The oil & gas sector remains under pressure and there is still legitimate concern that a lot of jobs will not come back before exceptional government income support measures expire, even with a 8-week extension of the CERB program announced this week. Looming over all of this is the concern that opening up the economy too quickly could lead to a resurgence in virus cases – particularly in a number of major US southern states where the COVID-19 curve never really flattened. 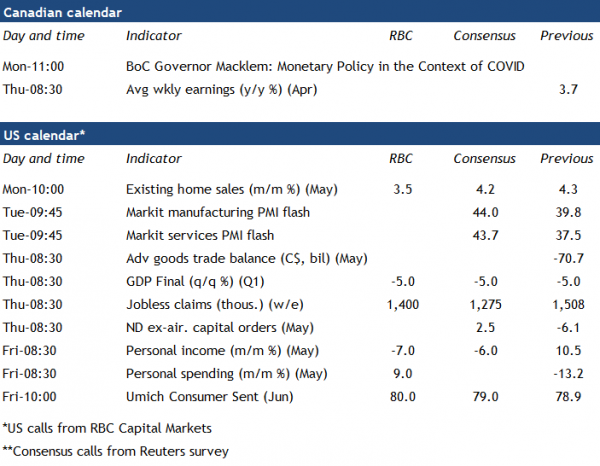