This week’s data gave us a better understanding of the scale of economic contraction in April when COVID-19 containment measures were at their height. StatCan’s “nowcast” of April GDP showed an 11% month-over-month decline on top of March’s 7.2% drop (slightly better than that month’s -9% nowcast). The cumulative two month slowdown is about 3.5 times worse than the peak-to-trough decline in Canadian GDP during the 2008-09 recession. In the US, real consumer spending fell by a staggering 13% in April after a nearly 7% drop in March as shop closures and physical distancing kept American from spending, even as government cheques and more generous unemployment benefits provided a nice boost to household incomes. Factory closures also reduced US durable goods shipments by nearly 18% in April, and auto production on both sides of the border was essentially zero. Those shutdowns weighed heavily on international trade flows with the US’s advanced trade report showing goods exports were down 25% in April while imports fell by 14%. We expect next week’s Canadian trade data will show roughly 30% declines in both exports and imports in April. Canadian exporters faced the added headwind of lower oil prices with North American benchmark WTI falling by another 40% in April (in Canadian dollars). Services trade shouldn’t be overlooked and will capture a significant slowdown in international tourism.

The rest of next week’s data will be timelier than the April trade reports, and should start to capture a turning point in economic activity as governments began to gradually ease COVID-19 containment measures in May. Purchasing managers’ surveys, which tend to be timelier and more forward-looking, should show an improvement in business sentiment in May, signaling the unprecedented pace of economic contraction in March and April began to ease. While re-opening likely meant re-hiring for some businesses, next week’s jobs numbers won’t reflect an upswing in employment. The Canadian and US reports will capture conditions in the second week of May, which might have been just past the labour market’s low point (the latest US jobless claims data showed a reduction in continuing claims for state benefits in the survey week) but was still worse than in mid-April. We expect Canada’s employment count will fall by another 300,000 in May (a tenth of the cumulative decline in March and April) while the unemployment rate, which has greatly understated the scale of labour markets slack, is expected to rise to 14% from 13% in April. Hours worked will continue to be a better indicator of labour market underutilization, having declined by 15% in both March and April. In the US, we are penciling in a 2.2 million decline in payroll employment after April’s 20.5 million drop, and a further increase in the unemployment rate. Looking ahead to June, re-hiring is expected to ramp up and should be more than enough to offset any further layoffs (US initial jobless claims were still above 2 million last week). 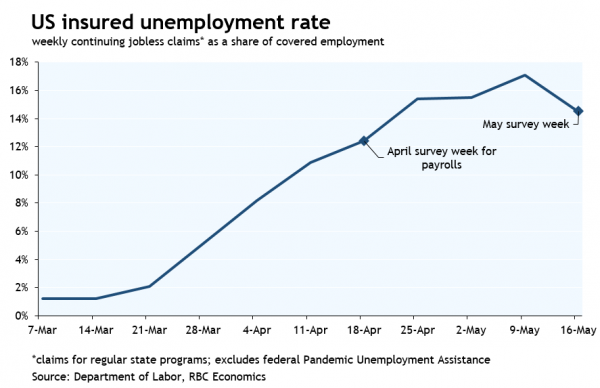 Wednesday brings both the Bank of Canada’s next scheduled rate announcement and incoming Governor Tiff Macklem’s first official day on the job. With a statement-only policy announcement and Deputy Governor Toni Gravelle scheduled to deliver an economic updated the following day, it might be a bit early for Macklem to put his stamp on the central bank. And we aren’t expecting any major policy changes next week. In Senate testimony this week, outgoing Governor Poloz once again noted positive early results of the BoC’s crisis response programs, which “have succeeded in restoring good functioning to many key financial markets that had been showing signs of significant stress,” and are now being relied on less as conditions stabilize. So we think it’s unlikely that the central bank will feel the need to tweak or add to its current programs, particularly as the new provincial and corporate asset purchase programs announced at its April meeting are just ramping up now. We’ll be watching the statement (and Gravelle’s update) for Governing Council’s thoughts on the evolving economic outlook. Governor Poloz has said recently that the economy is still tracking the BoC’s best case scenario from April. While that’s true of the current downturn (based on GDP reports to date), the recovery remains highly uncertain and the BoC’s best case of a nearly full rebound in economic activity by the end of this year still looks quite ambitious. The speed and scale of the recovery in the second half of 2020 will be an important factor in the next phase of the BoC’s monetary policy response to the COVID-19 crisis. 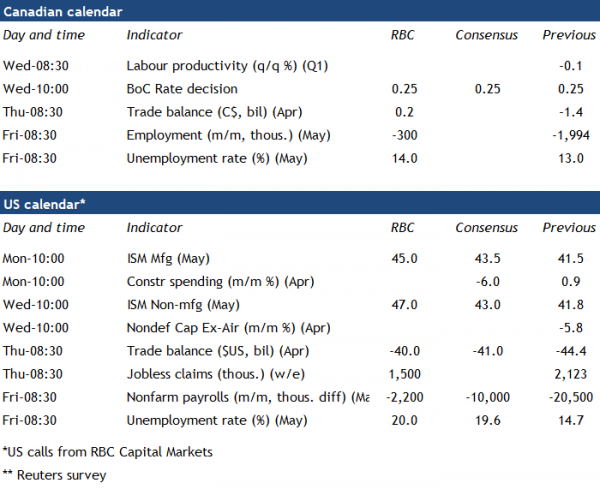 NTT Down 1.93% As It Negotiates Taking Docomo Private