Clément Beaune, France’s newly appointed minister for European affairs, has said his government will push for a robust rule-of-law mechanism that will make access to billions in EU recovery aid conditional on the respect for fundamental values in the light of developments in Poland and Hungary this month.

“It is not possible to explain to French, Polish, Hungarian and European citizens that you can have financial solidarity in Europe and not care how the basic rules of democracy, free media, and equal rights are respected,” Mr Beaune told the Financial Times.

During a marathon four-day summit on the EU’s recovery package this month, leaders kept open the precise nature of a rule-of-law mechanism after resistance from Warsaw and Budapest who said their governments were being unfairly targeted by the measure. Member states, along with the commission and the European Parliament, must now agree on how the conditionality will work with a goal of sealing the complete package by the end of the year.

France is allied with Nordic countries and the Netherlands in pushing for recovery money to be withheld for member states who flout fundamental principles. Mr Beaune said financial sanctions were “something we need to develop because legal and financial measures are the most powerful tools” against breaches of the rule of law.

“If there is doubt about how strong the EU is on its basic values, then there will be a doubt in the minds of every citizen about the relevance of the project,” said the minister, who was previously Emmanuel Macron’s Europe adviser. “Europe is not only a market but a cultural and political project.”

The EU’s clash with recalcitrant eastern member states has intensified after Poland’s government vowed to exit an international treaty on the protection of women against domestic abuse this month. Poland’s designation of “LGBTI-free zones” in six towns has also been criticised by the European Commission, which this week decided to withhold funds for the towns under the EU’s twinning scheme for cities.

Mr Beaune said the upholding the rule of law was an “existential issue” for the EU. “It is not west against east or about teaching countries a lesson. If you have a rule-of-law mechanism, it should not ex ante target any one country but if any government breaches the rule of law there should be elements of sanctions — financial and legal.”

As EU adviser, Mr Beaune played an instrumental role in shaping Mr Macron’s EU policies since his election three years ago, shadowing the president in all the EU summits. The 38-year-old political novice was one of Mr Macron’s advisers at the economy ministry under the previous presidency of François Hollande. Mr Beaune was appointed as minister for European affairs as part of a government reshuffle this month. 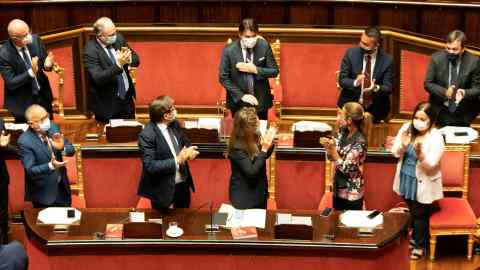 Mr Beaune welcomed EU leaders’ decision to fund a €750bn pandemic emergency response with supranational debt issued by the commission. He said the landmark agreement — which was pushed for by France and Germany as early as May — meant Europe had “crossed a Rubicon” by handing out hundreds of billions in grants to stricken economies.

So-called “frugal” countries such as the Netherlands, Austria, Denmark and Sweden have insisted the borrowing mechanism is temporary and will not extend beyond the pandemic emergency over the next three years. But Mr Beaune said the move to issue common debt had shown a “taboo” was broken over Europe’s readiness to pool its fiscal firepower and could be resorted to again in future downturns.

France will take over the rotating presidency of the EU for six months at the start of 2022 — coinciding with Mr Macron’s likely re-election campaign. Mr Beaune said his government would prioritise a planned “Conference on the Future of Europe” where citizens would be encouraged to lay out their priorities on health, migration and the future of the EU.

Mr Macron is also pushing for the creation of a series of new EU-wide levies — such as a European digital tax and a levy on carbon imports — to fund the costs of the €750bn borrowing. Mr Beaune said the debate over these revenue streams “will be the next crucial battle” in the negotiations over the recovery package. Mr Beaune has vowed that French taxpayers will not be levied to fund the EU initiative, which he said was expected to finance 40 per cent of France’s post-pandemic economic rescue plan — or €40bn.

“We don’t want to increase financial pressure on European citizens and European companies so we will have to find new ways [to generate money]”, said Mr Beaune.

Brussels has been tasked to come up with a plan for a digital tax and carbon border mechanism by early next year. However, political resistance to both levies is likely to be strongest in northern capitals who are fiercely protective of their national taxation powers.

“We will keep pressure on the commission because we think it’s necessary from an economic and political point of view. This is about how we finance our political affairs to make them fair, more efficient and more powerful,” said Mr Beaune.

Why is the ETC Price Steady Despite Risk of Further 51% Attacks?