This past week, the British Pound formed a significant top near 135.50 against the Japanese Yen. GBP/JPY broke many key supports near 133.50 and 132.50 to enter a bearish zone. 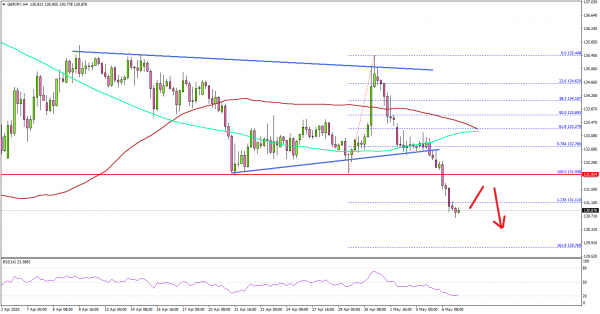 Any further losses could open the doors for a larger decline towards the 128.00 support. If there is an upside correction, the pair could find a strong resistance near 132.00 and 132.50 (the recent breakdown support zones).

Fundamentally, the UK Construction PMI report for April 2020 was released by the Chartered Institute of Purchasing & Supply and Markit Economics. The market was looking for a decline from 39.3 to 22.0.

The actual result was disappointing as the UK Construction PMI declined sharply from 39.3 to 8.2, indicating by far the fastest decline in construction output.

The latest reading was the lowest since data were first collected in April 1997. The previous record low was 27.8 in February 2009.

US 30 Index Pauses Its Upside Rally Below 200-Day SMA