Cable fell some hundred pips on Wednesday as traders booked profits from Tuesday’s 1.2% rally, weakening near-term structure and shifting focus lower. Bull-trap pattern is forming on daily chart following unsuccessful attempts to clearly break above daily cloud, as the pair closed above cloud top on Tuesday but subsequent weakness on Wednesday already retraced over 61.8% of Tuesday’s advance and touched cloud base. Rising bearish momentum supports scenario of return and close below the cloud that would confirm bull-trap and risk deeper fall towards 22 May trough at 1.2161. It seems that euphoria over sidelining introduction of negative interest rates was short-lived and pound remains pressured by fears of hard Brexit, the fact that the UK will not benefit from EU recovery fund and sub-zero rates scenario that remains as possibility on Britain’s fight to cushion devastating damages to the UK economy, caused by pandemic lockdown. 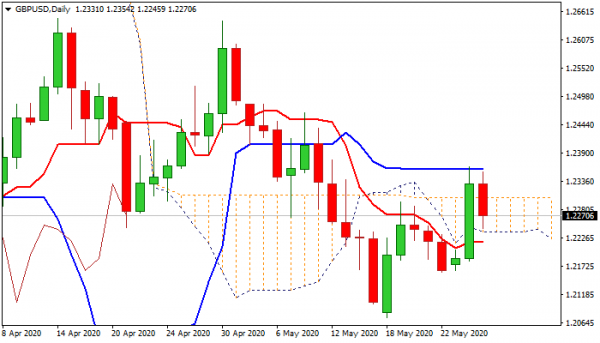