Glencore, the miner and commodity trader, has emerged as a big winner from the oil market turmoil sparked by a price war and the coronavirus pandemic, with its trading business expected to report blockbuster results.

The Switzerland-based company revealed in a production update on Friday that its “marketing” division had seized the opportunity to buy cheap barrels of crude when prices crashed in March and April and sell them in the futures market for a higher price.

As the result of a “very strong” first-half performance, the company said it now expected the unit to deliver earnings before interest at the top of a $2.2bn to $3.2bn guidance range in 2020.

Glencore’s marketing or trading arm generated about 40 per cent of group EBIT last year. The division sets Glencore apart from its “pure play” peers, helping to smooth out the more volatile earnings from its mining assets. This year, it will also compensate for the fact that Glencore doesn’t produce iron ore and has missed out on the soaring prices that benefited some rivals such as Rio Tinto.

Based on Friday’s update, analysts at UBS said the marketing division, which handles some 5m barrels per day of oil and crude, was set to deliver record half-year results.

Glencore is due to report interim figures on Thursday when it also decide whether or not to press ahead with a $2.6bn dividend payment.

The group, which chartered the world’s largest oil tanker in March to store oil, is not alone in reaping bumper trading profits from the oil market crash.

Royal Dutch Shell and Total managed to avoid losses in the second quarter as their trading arms stored cheap oil to sell later when prices rallied.

But a less welcome consequence of putting more oil into carry trades is higher borrowings — it costs more than $40m dollars to fill a very large crude carrier with oil. Glencore said its net debt had increased from the $17.5bn reported at the start of the year, without stating the current level. 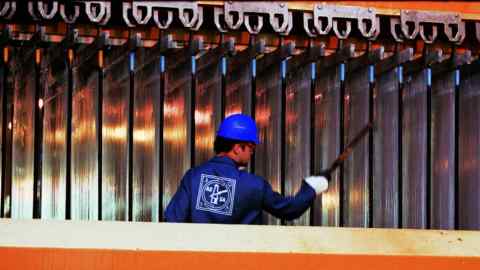 It also outlined plans for its thermal coal operations, saying it would mothball a big mine in Colombia and cut production from its flagship Australian coal business.

Thermal coal, used to generate electricity in power stations, has been hit hard by Covid-19 as demand from key consumers such as India has plunged because of lockdowns. Benchmark prices in Asia have dropped 25 per cent to below $50 a tonne this year.

Glencore, which is the world’s biggest producer of seaborne thermal coal, said it had applied for permission to keep the Prodeco mine in Colombia on “care and maintenance” while targeted volume reductions would be made in Australia, where it produces most of its coal. As a result, Glencore said it expected to produce about 114m tonnes of coal in 2020, down from its recent guidance of 132m.

Glencore has a long record of cutting output and leaving metals and minerals in the ground to help support prices. In 2015, it made a dramatic intervention in the zinc market, slashing its annual production of the metal by more than a third.