How the Stock Market Took Over the FX Market

Once upon a time in a pre-covid world, the currency market and the stock market were driven by different factors. Correlations between the two existed of course, but they were limited to a few pairs, like dollar/yen. Nowadays though, it feels like every FX chart is linked directly to risk sentiment and equity market performance, instead of cross-country fundamentals. What changed, and what would a stock correction from the current heights imply for the FX market?

The dollar: A haven once again

Gone are the days when economic data and other fundamental factors were the driving force in the FX arena. Nowadays, most economic news is worth next to nothing and currency moves are mostly just a reflection of risk sentiment. Emotions have become the name of the game, and those can swing wildly and quickly. In the span of a few weeks we’ve gone from caution, to fear, to panic, to skepticism, to greed, and then to euphoria – all of which has been mirrored in the charts.

So, what changed? A simple answer is that the dollar has. The greenback doesn’t always behave like a safe haven, it really depends on the situation and the stage of the business cycle. During crises though, the dollar tends to act like a defensive asset as investors flock to the safety of the reserve currency, and that’s exactly what happened this time.

The haven-like dollar now tends to move in opposite direction to stock markets, so pairs like sterling/dollar and to a lesser extent euro/dollar, typically move in the same direction as equities.

The other paradigm shift has been that interest rate differentials between economies – one of the biggest traditional drivers of FX – have essentially been eradicated. Back in the day, if real interest rates in Australia were considerably higher than the Eurozone for example, capital would gravitate towards the higher-rate regime and boost the Australian dollar over time. Expectations about how those rate differentials might change in the future was also a huge factor.

But with all major central banks having cut rates to zero or below recently, this element is no longer as relevant. Minor differences still exist, with the Fed having rates at a target range of 0-0.25% and the ECB at -0.50% for example, but the emphasis here is on ‘minor’. The spread is far smaller than it once was, diminishing its importance. 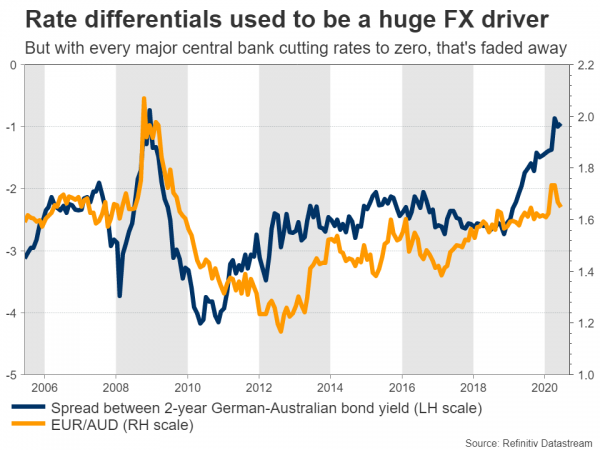 By simple process of elimination, if economic data don’t matter and if rate differentials hardly exist anymore, the only major ingredient left to guide FX markets is risk appetite. Combined with the dollar basically becoming a mirror reflection of risk sentiment, it’s easy to see why every currency pair has become so sensitive to movements in stocks.

Why is this important?

It’s crucial because many charts now move in unison. It has become quite frequent to see euro/dollar, dollar/yen, sterling/dollar, commodity currency pairs, and stock indices like the S&P 500 all approach crucial support or resistance levels at the same time, and then wait for the next catalyst.

To give a simple example, last year you could speculate on how Brexit was going to unfold by trading Cable. This year, you could be completely right about how Brexit will play out, but Cable may instead respond more to how risk sentiment evolves, not British fundamentals. Hence, a better proxy for Brexit developments in this era, may be euro/sterling. 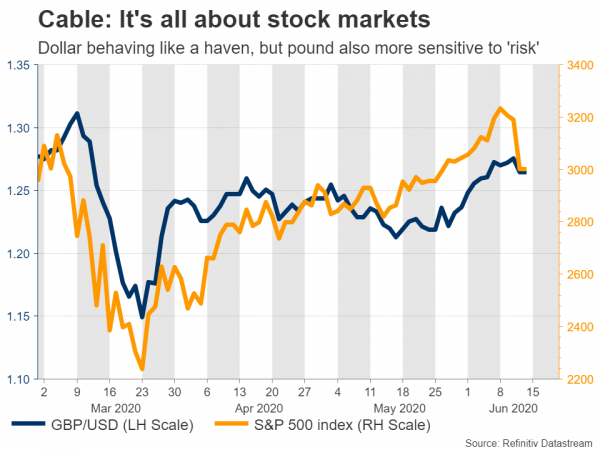 All this has implications for risk management and the ability to diversify in trading too. If most major FX charts are moving on the same theme, it’s much more difficult to effectively hedge risk. In this respect, different instruments like gold or cross pairs that don’t involve the dollar, can prove quite useful.

What would a stock correction mean for FX?

Equity markets have admittedly staged a monster rally in recent weeks, and that has also given fuel to the FX market. Defensive plays like the dollar and the yen have lost their shine, whereas the euro, pound, and the commodity currencies have all soared.

What’s striking is that some of them – like the aussie and kiwi – have even climbed above their pre-covid levels, which seems a little odd given the escalating US-China rhetoric and what that implies for these export-heavy economies.

From this lens, if the recent euphoria in the stock market continues to fade, the biggest FX casualties may be these commodity-linked currencies. The pound also seems at high risk, given its strong link to risk appetite, mounting Brexit risks, and the UK’s large current account deficit. 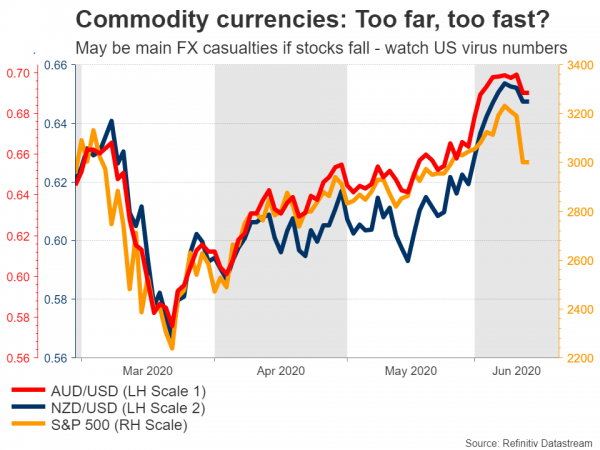 What might trigger that? The biggest risk is a second wave of infection hitting some regions, particularly the US. Markets have already turned more cautious on early signs that virus numbers are spiking again in the most populous US states, and the concern is that the latest protests may have boosted the infectivity rate further. The next few days will reveal if that’s true or not.

Is this the new normal?

For the foreseeable future, yes. For the correlation between FX and stocks to decline meaningfully and for economic data to matter again, the dollar has to stop acting like a safe haven, and that may only happen once the pandemic risks have subsided and the economic recovery can truly get underway.

In the meantime, risk sentiment is the only trade in town.

Three Unlikely EV Share Moves That May be Worth It.

Three Growth Shares That You Should Consider In 2021