How workplaces can help staff find refuge and support

Working in protection and firearms had risks but nonetheless Sally Benatar’s policing career was a refuge.

It was life at home with her husband that made her anxious. “All sorts of triggers could set things off and disturb the calm: dinner not up to standard, not being able to produce a receipt, asking for money to contribute to a colleague’s leaving present,” she says. Over their 17-year marriage, her husband’s controlling behaviour gradually increased. “As time went on it was just easier to change my behaviour, to stop doing things, stop going to church, not see my sisters so regularly — I constantly tried to minimise any aggravation.” She became isolated and her self-esteem deteriorated.

The turning point was being hit by a mug during a post-lunch row. Surrounded by broken crockery, she weighed whether to phone the police, knowing the call would change her life. “For 20 minutes I stood in the kitchen thinking through what would happen and then I called 101.”

The police arrested her husband and gave her the details of outreach services, which helped her overcome the logistical barriers that had seemed insurmountable. Her husband was given a conditional discharge. Now, almost four years after Chief Superintendent Benatar left the home she shared with her ex-husband, she worries that lockdown has intensified domestic abuse for those who cannot escape home to drop off the kids at school or go to work.

“What must it be like in lockdown to be living with a partner who you’re scared of?” she says. Ms Benatar, who is now the commander for south-west London, wants employers to understand the role they can play in helping men and women access services and support. “There’s nowhere to hide in a lockdown if you’re scared of your partner . . . We know how control can escalate into abuse, including violence. Domestic abuse can happen to anyone. There are options and they can get support, even in lockdown.”

As countries imposed rules to reduce Covid-19 infection, men and women were confined to their homes under their partners’ constant surveillance. Domestic abuse charities reported a rise in demand, prompting the United Nations to call this the “shadow pandemic”. Hestia, the charity Ms Benatar is working with, reported a 47 per cent increase in victims reaching out for information and support on its free domestic abuse app, Bright Sky. Many charities are predicting a surge in calls for help as lockdown eases.

With constraints on movement, employers may prove a lifeline. Lyndsey Dearlove, who heads Hestia’s domestic abuse campaign, says: “When businesses get it right and provide the right support in the workplace, it can be transformational. Victims of domestic abuse tell us that work can be a refuge when they are being abused, offering stability and reassuring them that they are good at something when their partner is telling them they are ‘useless’ and a ‘waste of space’.”

Hestia’s Everyone’s Business programme works with employers to equip employees with the skills to respond to colleagues’ disclosures of domestic abuse and by referring them to specialist domestic abuse services. The Met Police and infrastructure group Balfour Beatty are among a number of employers who have trained managers to ensure conversations are handled sensitively and they know where to point victims for support. Human resources policies may be updated to provide paid leave for victims. 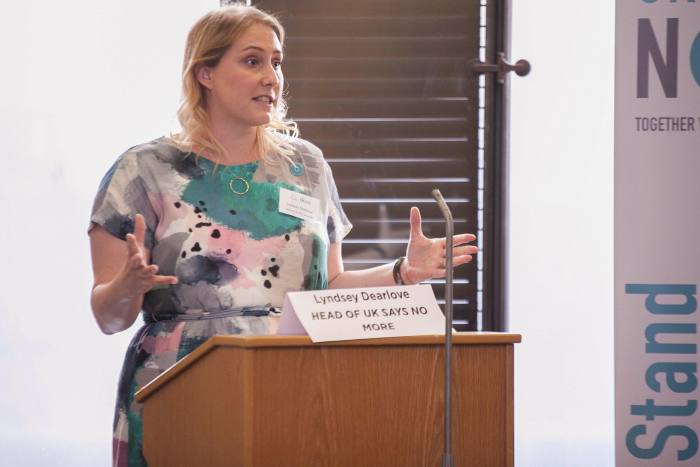 Hogan Lovells recently worked with Everyone’s Business to update the law firm’s domestic abuse policy. A number of employees undertook the training to be able to point colleagues in the direction of support services. Morrisons, the supermarket, conducted an internal campaign to highlight the issue of domestic abuse supported by a dedicated intranet site which includes links to professional support organisations. It can also support colleagues, by relocating them to a different site, for example, and allowing time off. It plans to set up an internal survivors’ group to provide peer support. This is in addition to its initiative to open up on-site pharmacy consulting rooms as safe spaces for customers.

Ms Benatar says employers can be invaluable in directing staff to services, and in making line managers and colleagues aware of what to do if they suspect domestic abuse.

Earlier this month, the UK government announced a review of workplace support for survivors of domestic abuse, including how employers might pay wages into different accounts to safeguard cash for those living with a controlling partner, or through making emergency payments available. Victoria Atkins, the safeguarding minister, says: “domestic abuse can affect every aspect of someone’s life, including their work . . . [It] often strips victims of their independence and denies them the opportunity to succeed and thrive.”

During this period of remote working, look out for colleagues displaying signs of abuse at home — this could be someone coming on to a Zoom call seeming very anxious, or unable to have a confidential conversation, says Ms Dearlove. “The first step is to make sure the support information is available. If they can get that from their employer, it helps.” They want employers to know that it is not their role to intervene at home because it may prove counter-productive. “They [are] a bridge between the victim and the support.”

It is never easy to leave an abusive relationship, says Ms Benatar, and co-parenting continues to be challenging for her. “I’ve never regretted calling the police — it was the hardest but best decision I made. When you are in an abusive relationship, things can seem insurmountable but they aren’t. Marriage separation is tough but the impact on children of a toxic relationship is harder.”

U.S. Shares Were Up By Today’s Close of Trade