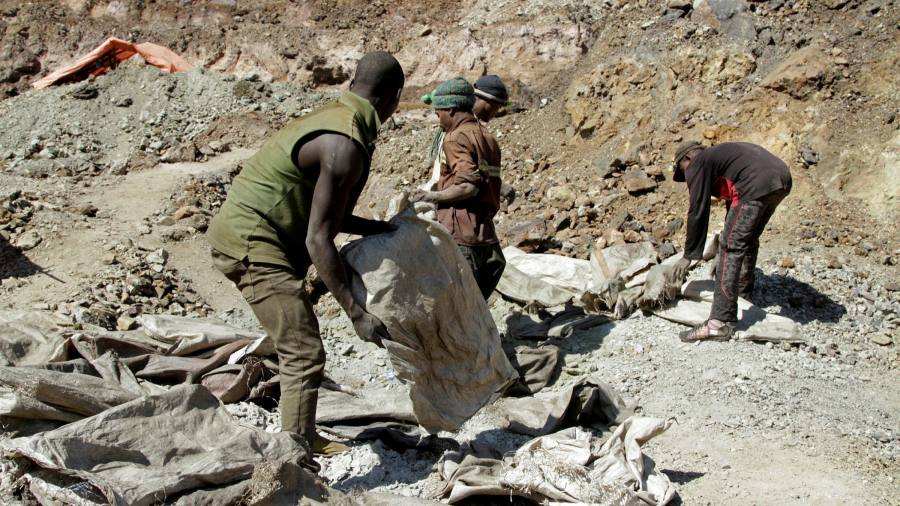 Every day, in the Democratic Republic of Congo’s copper and cobalt mining heartland, thousands of artisanal miners find their way on to industrial mines to scavenge a share of the riches, using pickaxes, shovels and sacks.

They do this to eke out a living in a region so densely covered by industrial mining licences that there is close to no space for anyone else to exploit the land’s rich mineral wealth.

The army did not keep artisanal miners away for long, however. International Crisis Group’s research at Tenke Fungurume showed that after just a few weeks they were back, later reporting that they had paid off soldiers to gain access. Since then, they have been digging away, eroding the site’s mineral base without the permission of the concession holders.

Artisanal mining has long presented a conundrum for companies operating in the cobalt-rich provinces of Haut-Katanga and Lualaba.

While it is nearly impossible to stop artisanal miners from encroaching on industrial mining sites, their unregulated presence poses grave safety risks for the mining companies, as well as reputational problems for both the businesses that own the mines and those that buy the extracted cobalt — a key component in lithium-ion rechargeable batteries.

These reputational risks are serious. For example, after the landslide at the Kamoto mine, the shares of Glencore, its majority owner, briefly lost 7 per cent of market value.

In December, a US lawsuit alleged that Apple, Google, Microsoft and Tesla and others were purchasing cobalt that had been artisanally mined by child labour at various industrial sites including Kamoto. In response to these allegations, several of these tech giants restated their commitment to keep their supply chains clear of child labour.

Most mining companies have not looked on this option favourably given the potential costs of monitoring artisanal miners. But companies should weigh these costs against the risks presented by the status quo, which include physical damage to their mines, or a scandal involving forced labour or military violence against civilians.

The Congolese government has an important role to play. President Felix Tshisekedi has promised to convert DRC’s vast mineral wealth into tangible benefits for its citizens, and with 2023 elections in mind, he will be looking to make good on this commitment. Giving approximately 2m Congolese artisanal miners better opportunities to work safely and legally would serve him well and also help keep the peace around mining sites.

Kinshasa has already taken a step in that direction. Under Congo’s 2018 mining code, industrial companies can subcontract work to artisanal co-operatives, who could exploit those deposits the companies cannot profitably harvest using industrial methods. Artisanal miners would benefit in turn from being able to mine legally, while charging companies higher prices than they would normally command if selling to Congolese buying houses.

There is a political problem, however. Mr Tshisekedi’s predecessor, Joseph Kabila, still controls many officials in government. Some of them are behind a 2019 decree that requires artisanal miners to sell all cobalt to a state buying company they set up.

If the president, who is trying to shake off Mr Kabila’s grip on power, wants to avoid a situation where minerals are channelled into a state company he does not really support, he will have to figure out a way to obtain an exemption to the decree, allowing artisanal miners to subcontract and sell to industrial companies. Mr Tshisekedi may have to rely on support from some of his international allies, such as the US, as he ramps up pressure on Mr Kabila to let go of his influence over the mining sector.

International organisations setting and monitoring standards for mining companies, such as the OECD, can also help. These organisations currently tend to emphasise the downsides of incorporating artisanal miners in formal supply chains, primarily because of the legitimate concerns around labour and environmental practices, and connections between artisanal mining and armed groups.

But a handful of mining companies who have contracted artisanal mining co-operatives to work on land licensed to them in Haut-Katanga and Lualaba, prior to the 2019 decree, have shown that industrial groups and artisanal miners can work together.

If the mining sector, the Congolese government and international organisations work towards creating a compact between industrial companies and artisanal miners, it will reduce the supply chain risk, help employment and development in Congo and create a system that will be beneficial to all.

Anouk Rigterink is a fellow at the Crisis Group Economics of Conflict, and Nelleke van de Walle is its Central Africa project deputy director. A copy of their report can be found here.