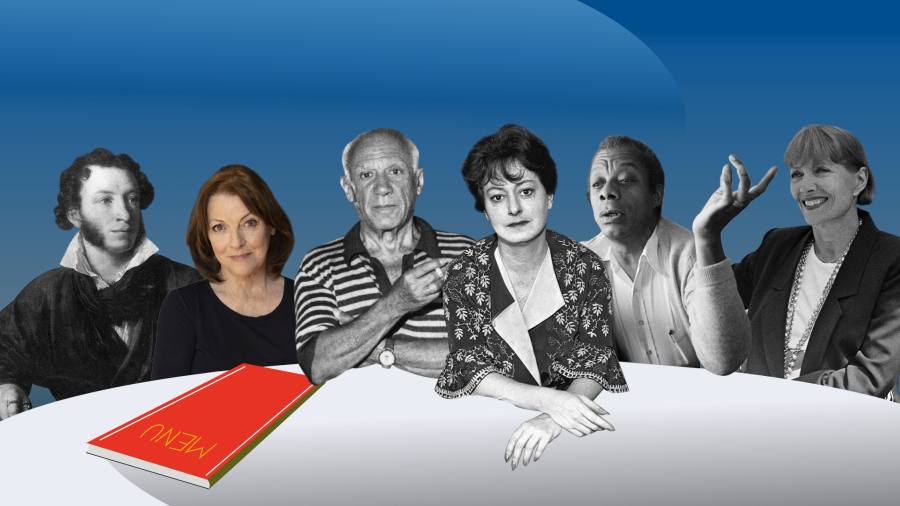 My ideal dinner has to be outside and by the sea. Proper, warm, blue sea, with waves and a beach. So I’ve chosen San Fruttuoso, on Italy’s Ligurian coast. There is no road to this small crescent bay, with its arcaded medieval abbey crouched on the sand, but after the last boat has taken away the day’s visitors there is still a restaurant open, Da Giorgio. I will borrow its stupendous terrace, perched high on the rocks over the silent and silvery sea: the owners will forgive me if all the rest is invention.

The first guest to arrive down the rocky path is the Russian poet Alexander Pushkin. He is in a petulant mood: his delicate, 18th-century dandy’s shoes are scuffed. I’ve been in love with him since I was 14 — for his heady and timeless invention, for his hatred of authoritarianism, for the passion of his poetry that effectively reinvented the Russian language, for his bouts of deep seriousness and of wild hilarity. Doesn’t he know I chose him for this dinner over Shakespeare? He’d better behave.

And is he going to like the writer Dorothy Parker, now tripping down the steep path in her equally silly shoes? Brilliant, restless, unhappy, a fierce campaigner for social justice, a feminist who lived it rather than using the term — frankly, I’ve asked her to see whether this famous New York wit really is as funny as she’s said to be. These two will be fine together once they get on to their favourite subject — suicide.

Picasso arrives next and causes a stir. I’m nervous about him as a guest: is he the kind of man who sulks unless you’re talking about him? Of course he is. But I couldn’t resist meeting him, for a breadth of vision that is unrivalled, inexhaustible, endlessly inspiring: rare and true genius. He and Parker hate each other on sight, predictably, but I know they’ll soon bond over dachshunds.

Then, James Baldwin, writer, thinker, pioneering campaigner. I’m nervous about meeting him. I’ve read him obsessively: I want to climb into his wide, generous mind and wander around in it, as through the rooms of a rambling house, some dark and narrow, others lit by shards of sparkling light.

My fifth guest is late, but I must give the others a drink. Not champagne — that’s all wrong by the sea. And Parker will leave if I don’t give her a cocktail. So I produce a delicate, ice-cold Lemon Balm Gin Collins, devised specially for tonight by Panu Long, one of London’s most inventive mixologists. And, as an amuse-bouche, succulent local figs wrapped in prosciutto — smoky-sweet and salty, to balance the light, tart, herby gin.

Is Picasso the kind of man who sulks unless you’re talking about him? Of course he is

Next, it has to be fish, straight from the sea swooshing the rocks below us. Brochettes of prawns and a ragbag of the day’s catch — a chunk of mullet, perhaps, next to a squiggle of tentacle — seared fast on a brazier, oily with garlic and the herbs of the hills around. With that, we’ll drink a Bourgogne Aligoté, Domaine Dubois, introduced to me by Robert Slotover on his delightful, quirky Slotovino wine blog.

Now, traditionally, we need a meat course. I imagine Picasso is longing to sink his teeth into the flank of a bull. But this meal is my fantasy and he’ll have to put up with a fantastical dish. It’s a tribute to my father. A clever, ironic man, who somehow landed up with a houseful of brats and a decade or so of basic family suppers, he’d eye the Monday-night mince and cabbage and say, expansively: “Ah, wonderful — Poulet crème flambé à l’Armagnac!” We four kids had no idea what this meant, but we would all chant it anyway: a magic charm from another world.

It took me years to realise the dish probably didn’t exist (you can’t flamber something with cream in it). But we’re having it anyway. Pushkin will like the idea: his taste for French food led him to stuff his hero Eugene Onegin, on the razz in St Petersburg, with Strasbourg pie (foie gras, truffles, grouse and pork, wrapped in pastry) while knocking back an 1811 vintage champagne. Gourmandise in iambic tetrameter.

And although Baldwin’s tastes might be simpler, he too embraced the French life, in St-Paul-de-Vence, after a wandering existence. With the impossible poulet, he’d like a light red wine from the Jura Arbois, Domaine Tissot Poulsard.

Nobody ever needs a cheese course, but it is a happy excuse to drink a stonking red. So I’m going to indulge my love of Catalan grub and serve a cheese called Ombra, described by one food writer as the love child of Manchego and Parmesan. This makes it sound harder and drier than the smooth, almost butterscotchy sheep’s cheese I know, so perfect with membrillo and a few leaves. Controversially perhaps, I’m going to pair it with one of my favourite reds, the gorgeously deep Château Musar from Lebanon.

Now, as my guests warm to their discussions of human rights, the state of society, art, suicide and dachshunds, there’s the whole dessert question. Me, I can’t be bothered with puds. But I know this: if you want your guests to love you, give them chocolate. So we’ll have some salted caramel chocolate fondants, little tumps of feathery, very dark chocolate sponge that disgorge the gooey caramel as you dive in. With some vin santo, an ambrosial Fèlsina — so that I can just dunk some cantucci into it.

All this is created out of the air by our chef tonight, Babette Hersant. She, if you remember, is the servant who blew her lottery win on a single resplendent feast for the two women who took her in as a refugee, years before, in the 1987 film Babette’s Feast. She’s played by the wonderful Stéphane Audran — and that’s who has been my far-from-silent fifth guest tonight.

The late Audran’s style, courage and intelligence were a guiding light for so many women of her era. She knew about making a fantasy come to life.

Platinum Surges To Above $1,300 Before Close