GDP numbers out of Japan will be headlining the start of the trading week as first quarter growth estimates are published on Monday local time (Sunday, 23:50 GMT). The world’s third largest economy is expected to have contracted for the second quarter in a row, meaning it has entered a technical recession even though Japan has opted against a strict lockdown. But Japan’s economic woes began before the outbreak of the coronavirus and this latest crisis only adds to the pain for exporters.

Just two years ago the Japanese economy was enjoying its longest stretch of uninterrupted growth in more than a decade. But Trump’s trade war with China swiftly put an end to that impressive run. As trade tensions intensified, so did the economic impact on Japan, which is reliant on both China and the United States for not only trade in finished goods but also for its supply chains. Gross domestic product (GDP) sagged in the second half of 2019 as flat growth in Q3 turned to a 1.8% quarterly contraction in Q4.

That trend almost certainly did not change in the first quarter but the rate of decline in GDP likely moderated as easing trade tensions in late 2019/early 2020 would have made a positive contribution to net trade at the start of the year. But with the rapid transformation of the economic reality in March, GDP is expected to have shrunk by 1.2% over the entire quarter, led by a slump in private consumption and business expenditure. 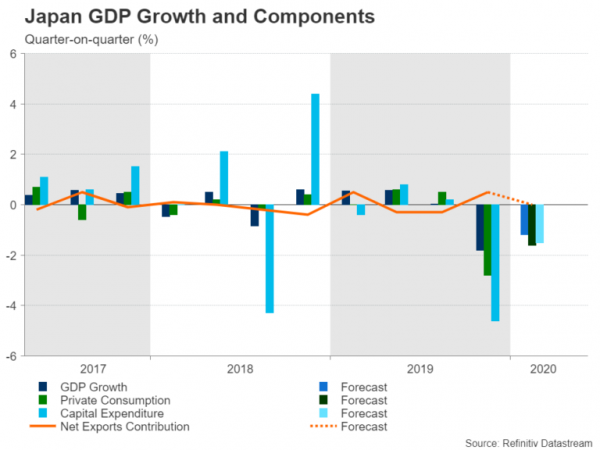 Looking ahead to the rest of the year, the downturn is anticipated to deepen, particularly in the second quarter, despite the fact that the social distancing measures enforced in Japan were nowhere near as draconian as those imposed in much of Europe and the United States. However, Japan’s decision not to follow other countries with tough restrictions is more to do with its constitution not allowing the government to ban certain activities such as non-essential travel by individuals than there not being the need to do so.

Hence, the government used the country’s national state of emergency law to give prefectures the power to issue certain guidelines to local businesses and residents asking them to shut down or stay at home. However, the rules did not apply nationwide to begin with and after initially succeeding in keeping the number of infections low, new cases started to surge in late March, forcing Prime Minister Shinzo Abe to expand the state of emergency to all prefectures across the country on April 16.

The number of new virus cases have since declined sharply and Abe has lifted the law in all but the most affected prefectures, which includes Tokyo. The government is hoping that good hygiene and the avoidance of physical contact by the public, as well as the resumption of contact tracing now that the numbers have come down will allow large swathes of the economy to reopen.

On the face of it, this should be a positive development and Japan may even come out of the pandemic having suffered a much smaller loss of output than other Western nations. However, given Japan’s already weak consumption levels and with doubts about how quickly consumers globally will hit the stores as lockdown measures are relaxed, the outlook for Japanese manufacturers – the main drivers of the economy – looks bleak.

This then raises questions about how much additional stimulus can the government and the Bank of Japan provide. The government has already announced several fiscal packages to cushion the blow from the virus, while the BoJ has ramped up its asset purchases and introduced cheap lending programs for struggling businesses.

However, the ballooning fiscal deficit and the BoJ’s pledge to buy an unlimited amount of bonds do not appear to be troubling the yen, which remains elevated following the rally in March when markets were first struck by the virus turmoil.

The GDP data is therefore unlikely to leave any marks on the Japanese currency even if it disappoints. Global risk sentiment will continue to be the main driver of dollar/yen, especially now that rate differentials between the US and Japan have vanished. But in terms of near-term risks, the 106.70 is an immediate support to watch for the pair as breaching it would bring into range the May tough of 105.97. On the upside, the 108 barrier is the key resistance that would be tested if the yen were to come under selling pressure.

Risk Markets Setting Stage for Pullback, But To Be Confirmed

BoC keeps rate at 0.25%, scales back some market operations

HKD Supported by Low US Yield and Seasonal Factors, Despite Huge Political Uncertainty Ahead