An unprecedented drop in GDP in the wake of COVID-19 containment measures kicked off with a 7.2% decline in March. That was easily the largest one-month drop on record but was still less-bad than feared. Statistics Canada had earlier estimated the drop at 9% in March. Few industries were spared, but the normally more stable services-sector was (as expected) softer with social/physical distancing measures effectively targeting activity that is normally more resilient to the economic cycle. Education output fell almost 14% as schools closed in the latter half of the month. Even healthcare activity plunged 11% as non-COVID-19 related medical care was reduced. But, as expected, the real brunt of the downturn was felt in accommodation and food services and arts, entertainment & recreation, both of which plunged about 40%. The downturn in GDP was widely expected to intensify in April, and Statistics Canada confirmed as much today with an advance estimate that GDP dropped another 11% in that month. That would bring the 2-month drop in activity to ~17%, about 3 1/2 times the entire cumulative 10-month peak-to-trough decline in GDP in the 2008/09 financial crisis.

On a quarterly basis, output fell 8.2% in Q1 as a whole (at an annualized rate) – led by the largest quarterly decline in consumer spending (-9.0%) on record. The GDP drop was the second largest on record back to 1961. That was a somewhat smaller-than-expected drop but is still striking given activity was only really dramatically curtailed for the last two weeks of the quarter.

As bad as March and April economic numbers have been, it also looks increasingly likely that we are already past the bottom of the latest economic downturn, with GDP potentially getting back on a positive growth trajectory as early as May. That won’t be enough to prevent a historically large drop in Q2 output – likely multiples of the decline in Q1 – but it would leave the data tracking along the more “optimistic” of the range of (all bad) scenarios the Bank of Canada included in their last Monetary Policy Report. Government support programs for those losing work have also been unprecedented – household disposable income actually managed to edge slightly higher in Q1 despite the large drop in overall economic activity because government transfers increased. Still, the three million jobs lost over March and April will not be recouped quickly. The pace of easing in containment measures that began in many regions in May is likely to remain gradual. And some industries (anything that requires people to be gathering in large groups, so a wide swath of tourism-related industries) will remain depressed until there is a vaccine or effective treatment. We expect things will begin to get better from this point, but still look for the unemployment rate to remain elevated at 8.5% in Q4 of this year. 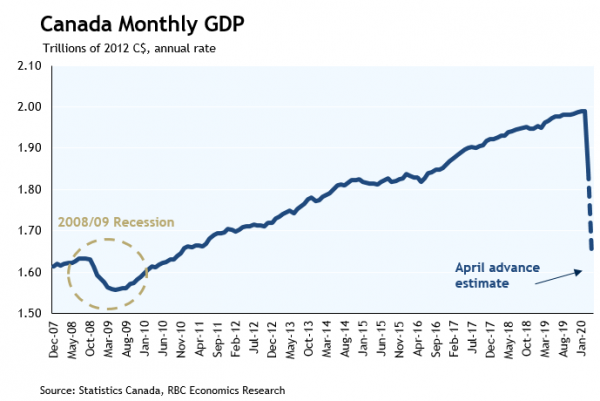 3 Tech Shares You Should Definitely Buy In 2020

After Hours, IEA And Others Spike