London transport set for £1.6bn bailout after ‘running out’ of money

Transport for London is set to receive a government bailout of £1.6bn after it came close to running out of money following a plunge in passenger numbers during the coronavirus lockdown.

Government officials confirmed on Thursday evening that the Treasury and Department for Transport had agreed the rescue package after weeks of negotiation with TfL, which runs public transport in the capital. An announcement could come as early as Friday.

As part of the deal the government will undertake a review of TfL’s finances, which is expected to lead to fare increases in the coming months. The government will also put two people on the TfL board to increase its oversight.

The authority will have to guarantee the return of all transport services back to pre-pandemic levels — higher than the 75 per cent level London mayor Sadiq Khan was aiming for next week.

And TfL has agreed to take adverts telling people to “Stay Alert”, the government’s controversial replacement for the previous “Stay at Home” anti-coronavirus ad campaign.

The details of the package are also expected to include issues like the postponement of several new projects such as the proposed Bakerloo Line extension.

The deal was reached just hours after Mr Khan had warned of deep cuts to services if the government did not agree to a financial rescue package by the end of Thursday.

The London mayor said the capital’s transport authority was “running out” of money and he was concerned about the steps he would have to take if the DfT failed to step in to plug an anticipated £4bn black hole in TfL’s finances.

“Unless the government today gives us confirmation of the grant that we need, the consequences could be quite severe and the implications for all of us will be huge,” the Labour mayor told LBC radio. “We’ll have to start reducing services. The only way to balance the books is to cut services.”

A senior government source said: “We were always prepared to consider putting more money into keeping Tube and bus services running in London and to help the travelling public stay safe from coronavirus . . . this money comes with many strings attached.”

An ally of Mr Khan said: “The government has belatedly agreed financial support for TfL to deal with Covid-19 as they have for every other train and bus operator in the country.

“But they have forced ordinary Londoners to pay a very heavy price for doing the right thing on Covid-19 by hiking TfL fares, temporarily suspending the Freedom Pass at busy times and loading TfL with debt that Londoners will pay for in the long run.”

TfL, which has seen its government grant gradually withdrawn in recent years, now relies almost entirely on fare income — but passenger numbers have plunged to a trickle during the coronavirus pandemic.

The agenda for TfL’s finance committee meeting earlier this week said there was still a gap of £3.2bn in the authority’s emergency budget for this financial year to the end of March 2021. 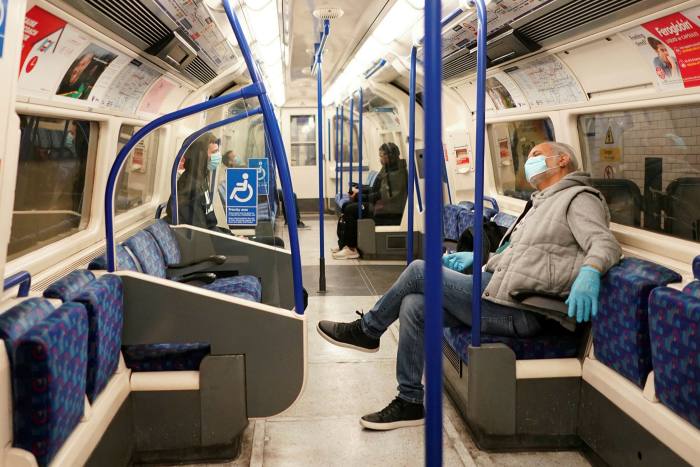 As part of government plans to ease the lockdown, ministers this week urged people working in some sectors to return to work. But they had also asked those that could work from home to do so to prevent public transport from being swamped with commuters.

TfL data showed the number of Tube journeys on Wednesday were 94 per cent down on the same day a year earlier albeit with some bottlenecks.

Transport officials have warned that the Tube can only run at about 15 per cent capacity while at the same time strictly adhering to the 2-metre social distancing guidance.

TfL has said it will need also need long-term support because it does not expect passenger numbers to return to pre-lockdown levels for several years.

“It is inconceivable that TfL won’t need government funding not only for 2020-21 but also for 21-22,” said Tony Travers, a professor at the school of public policy at LSE. “That means the need for a very significant government grant this year and the year after.”

Mr Khan said the authority was spending £600m a month with hardly any income to cover those costs. “We’re the only transport system in western Europe that gets no government grant,” he said.

TfL at the start of the crisis had a cash reserve of over £2.1bn but that buffer had rapidly fallen, the mayor said. Mr Khan was accused by Keith Prince, Conservative GLA transport spokesman, of “political gameplay”, pointing out TfL still had £1.2bn in reserves.

But Mr Khan pointed out that the authority was obliged by law to keep two months’ worth of money in reserve to fund services.

Yet the authority has continued to run 80 per cent of bus services and half of regular Tube services. It has furloughed 7,000 staff — a quarter of its workforce — and stopped 300 construction projects.

Advanced Micro Devices Shares Down, In Talks to Buy Xilinx

Asian Shares Mostly Down By Close of Trade