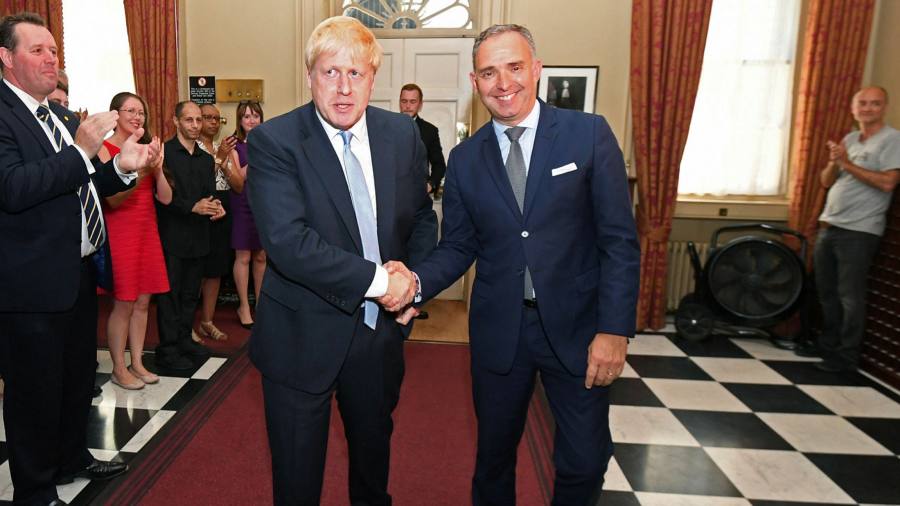 Mark Sedwill, the UK’s most senior civil servant, is expected to leave his position on Monday as Boris Johnson plans to split the senior Whitehall roles of cabinet secretary and national security adviser.

Sir Mark, who has served as cabinet secretary since 2018 and national security adviser since 2017, has been “unhappy” recently, according to colleagues. Rumours have spread across the highest levels of the civil service this week that his departure is in the pipeline.

One senior cabinet minister told the Financial Times they expected Sir Mark to leave his role on Monday. Several Whitehall officials added that Sir Mark’s exit as cabinet secretary had already been agreed with Mr Johnson and he was unlikely to remain as his security adviser. The leading contender to replace him in the NSA role is David Frost, currently the prime minister’s Brexit adviser and a former diplomat.

The senior mandarin’s exit is likely to be part of a wider shake-up of the civil service overseen by the prime minister’s chief adviser, Dominic Cummings, and Cabinet Office minister Michael Gove. Allies of Mr Johnson said the prime minister would use Sir Mark’s departure to split the roles he has been performing and re-establish separate positions.

Number 10 declined to say whether Sir Mark would be in his job by the end of the year. “Sir Mark continues to work closely with the senior team to ensure that the government receives all the advice that it needs,” a spokesperson said. The Cabinet Office and Downing Street also declined to comment on an impending split of the NSA and cabinet secretary positions.

However, home secretary Priti Patel hinted on Sunday that significant Whitehall reforms would soon begin. “This is the people’s government, delivering on the people’s priorities, and effectively any reforming government will be based around the type of delivery that our prime minister wants to drive for our great country and obviously have the right kind of support around him to deliver that,” she told Sky News.

Government insiders said Sir Mark’s departure as national security adviser was expected to be announced first, while his exit and the naming of his successor as head of the civil service could come later.

“It is a golden opportunity to recreate the badly-needed role of national security adviser. It was more than a full-time job when I did it and the world is an order of magnitude more dangerous and unpredictable now,” he said.

One senior civil servant said that Sir Mark may opt for a career in the private sector. “Mark is someone who has a formidable intellect and a huge amount of experience. He will be able to earn 10 times as much in the private sector if he wants to. It would be understandable if he just thought ‘it’s not worth the battle’.”

Another Whitehall figure said the shake-up seemed as much about Mr Gove and Mr Cummings ensuring that their “people” were in charge rather than the pursuit of a radical policy agenda: “It’s all about control.”

Sir Mark’s departure has been expected for some months amid rising tensions with the prime minister’s inner circle. One ally of Mr Johnson said the prime minister had come close to firing Sir Mark at the end of May, when Mr Cummings and other advisers argued that he was a barrier to reform. But Mr Johnson was later persuaded by chief strategic adviser Eddie Lister, and Martin Reynolds, his principal private secretary, not to remove him.

Mr Gove set out his manifesto for reforming the civil service on Saturday in a lecture titled “The privilege of public service”. Citing former US president Franklin D Roosevelt, the Cabinet Office minister said the centre of government had to be reformed to improve delivery and policy for “the forgotten man”.

“Roosevelt recognised that faced with a crisis that had shaken faith in government, it was not simply a change of personnel and rhetoric that was required but a change in structure, ambition and organisation,” he said. Mr Gove said that civil service recruitment needed reforming to broaden the skills base in Whitehall. He also suggested more government departments should be moved out of London.

US Senate passes bill that puts some Chinese listings at risk