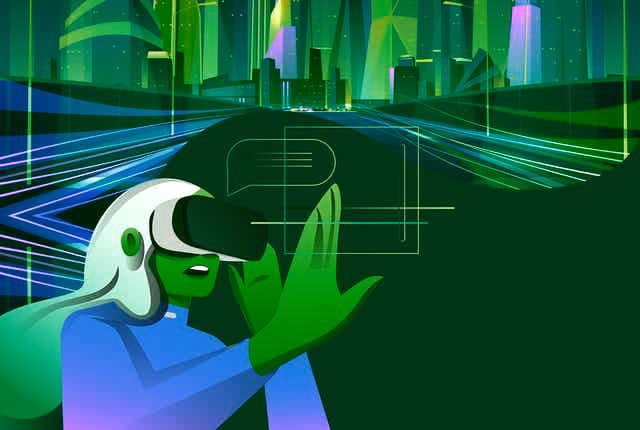 In the years before Facebook CEO Mark Zuckerberg’s recent META announcement, dozens of companies have been designing the software and hardware that could be used for this building the so-called Metaverse.

On the finance side, back in June, investment firm Roundhill Investments launched an exchange-traded fund (ETF) in June to track and profit from the work of metaverse enablers.

The video game company Roblox Corporation, which went public this year, visions the metaverse as a place where “people can learn, work, play, create, and socialize in the context of millions of 3D experiences.”

Roblox aims to empower developers and users to create digital worlds. In addition, the CEO discussed the future of shopping and conducting business on the platform. It plans a virtual economy powered by its own currency, Robux.

During an earnings call this year, Microsoft CEO Satya Nadella said that the company is trying to create a “corporate metaverse,” where the digital and physical worlds will merge in its offerings.

In the gaming world, Microsoft owns Xbox and the world-building game Minecraft, significantly impacting the development of the metaverse.

With the change to META Platforms, Facebook aims to be considered more of a metaverse company than a social media company. With over 3 billion users, the tech giant has invested heavily in augmented and virtual reality. Its Horizon VR environment is accessible via its Quest headsets.

Computer chip maker Nvidia has built its Omniverse platform to connect virtual worlds in 3D. According to the company, Omniverse is the “plumbing” on which metaverses can be built. The technology simulates real-world buildings and factories.

Another company that might be able to provide tools and technologies to build the metaverse is Unity Software, which develops video game design software.

Snap, the company that owns Snapchat, has long created augmented reality filters and avatars that overlay digital elements on the real world. Earlier this year, it unveiled its first augmented reality glasses, which developers can use to create experiences for the glasses.

Architects and engineers use Autodesk software to design and create buildings and products. The software is also used to build virtual worlds for entertainment and games.

Tencent Holdings is the largest video game company in the world by revenue. Furthermore, it holds stakes in major studios such as Epic Games and Activision Blizzard. The group registered numerous metaverse-related trademarks for its social network QQ this year, according to the South China Morning Post.

Epic Games is the company behind Fortnite, the video game phenomenon. It has developed beyond a simple game to offer digital social experiences to its users.

Also owned by Epic is a large game engine, Unreal, used to develop a large majority of games and visual effects.

Another player in the metaverse is e-commerce giant Amazon.com, which offers a wide range of media and is the world’s largest cloud service provider.

The metaverse concept is likely to take more than a decade to deploy, requiring the cooperation of tech giants.

Polygon could double if it can break this crucial hurdle

Hertz “re-IPO” to begin on Tuesday