Ministers have identified June 22 as the date when they hope to reopen England’s pubs and restaurants serving customers outdoors, amid fears of mass job losses if the hospitality sector misses out on the lucrative summer season.

Chancellor Rishi Sunak is among half a dozen ministers — calling themselves the “save summer six” — seeking to accelerate the reopening of the economy. The hospitality sector was not due to open until July 4.

Downing Street said no date had been set for the reopening of beer gardens, terraces and marquees, but three senior Whitehall officials said the target date was June 22. The cabinet will discuss the plan on Tuesday.

Some scientists are worried that Prime Minister Boris Johnson is lifting lockdown too early, risking a resurgence of Covid-19 infections, but he is now convinced that the economy is facing a cliff-edge unless it starts to reopen.

The Sunday Times reported that Mr Johnson simply said “Christ!” when warned by Alok Sharma, business secretary, last week that 3.5m jobs were at risk in the hospitality sector.

Mr Sharma has been asked by Mr Johnson to make the case for cutting Britain’s 2m social distancing rule to allow for more customers to be served in commercial premises. The business secretary spoke to his Danish counterpart on Sunday to discuss the operation of that country’s 1m rule.

Mr Sunak is among those who would like to see a full reopening of pubs and restaurants before July 4, with social distancing rules in place.

Meanwhile, the government confirmed it would open up places of worship for private prayer on June 15, the same day as non-essential retail.

Pub, hotel and restaurant operators have been among the worst hit by the lockdown, the total closure of their sites leaving them with no sales over the crucial Easter and May bank holidays.

Some warn that reopening under the current 2m guidance will reduce capacity to such an extent that their businesses will not be viable regardless. “We need pubs to prepare for reopening completely on July 4 with 1m [distance],” said Simon Emeny, chief executive of Fuller’s.

Mr Sharma will chair the first meetings of his new “recovery roundtables” this week, bringing together businesses, business representative groups and leading academics.

Mr Johnson will set out his broad UK recovery plan later this month, focused on infrastructure and investment, while Mr Sunak will give an economic update in early July.

Separately, the mayors of Greater Manchester and the Liverpool City Region said on Sunday that the rise of the R number above 1 — the point above which infection can spread exponentially — in England’s North West was proof that the lockdown was being eased too quickly.

Andy Burnham and Steve Rotheram, both from the opposition Labour party, said schools should remain shut to all but essential workers’ children and people should stay at home.

Mr Rotheram said the cities might have to implement a “local lockdown” at 24 hours notice, but he had no details on how to do so or how big an area might be covered in such a move. “What is the legal status of a lockdown? Would it be enforced by the police? It is more back of a fag packet stuff from the government.”

Some scientists are worried that the prime minister is easing the lockdown too early, when daily community infections are still running at more than 5,000 and the R number remains close to 1. 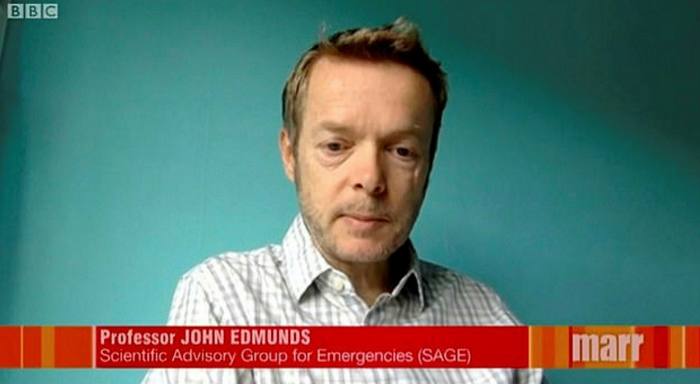 John Edmunds: ‘I wish we had gone into lockdown earlier. I think that has cost a lot of lives,’ © BBC

John Edmunds, a government scientific adviser, said the decision to delay locking down Britain until March 23 — after many other European countries had imposed draconian restrictions — cost “a lot of lives”.

The professor of infectious disease modelling at the London School of Hygiene and Tropical Medicine, who attends the government’s Scientific Advisory Group for Emergencies, admitted that the data available in early March were “really quite poor”.

But he told The Andrew Marr Show on the BBC: “I wish we had gone into lockdown earlier. I think that has cost a lot of lives, unfortunately.”

Matt Hancock, health secretary, said the government was guided by scientific advice and took “the right decisions at the right time”.