NZDJPY struggles to gain ground past upper band of cloud

NZDJPY appears to have somewhat adopted a horizontal demeanour, something also reflected within the unclear Ichimoku lines. As positive momentum is barely present, price is finding difficulty in moving above the Ichimoku cloud’s upper band.

Turning to the short-term oscillators, they too paint a picture of weak momentum. The MACD is marginally below its zero point and only just above its red signal line, while the RSI, slightly above its neutral mark is pointing down. That said, traders need to be aware of the dominating and declining simple moving averages (SMAs).

Should sellers push lower into the cloud, initial support could arise from the tough 64.84 level, which is the 38.2% Fibonacci retracement of the down leg from 73.52 to 59.45, and where the 50-day SMA and the Ichimoku lines currently reside. Managing to push under these may send the price towards the 63.54 low ahead of the 63.07 border and the 23.6% Fibo of 62.78 beneath. If these obstacles fail to halt declines, the pair may test the 61.77 trough.

Overall, the long and medium-term timeframes are negative. That said, the short-term bias is neutral-to-bearish below 66.51 and a break either above 66.16 or below 63.54 would rekindle a direction. 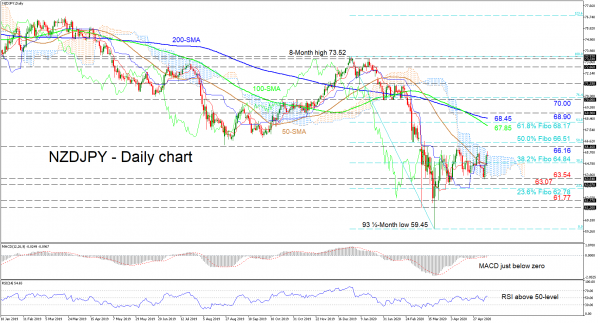