NZDUSD is extending price action above the 100- and 50-period simple moving averages (SMAs) after recently finding some traction at the 200-period SMA. Moreover, the slight incline in the SMAs backs the recent improvement in the pair.

Turning to the short-term oscillators, they are suggesting that the price may continue to advance for now. The MACD is strengthening in the positive region above its red signal line, while the rising RSI approaches the 70 oversold mark. Moreover, the stochastic lines – in overbought territory – have yet to show bearish signs for now.

Overall, very short-term optimism exists in the pair and a move above 0.6217 could return a neutral picture in the medium-term, while a break above 0.6447 could shift the short-term timeframe neutral-to-bullish. 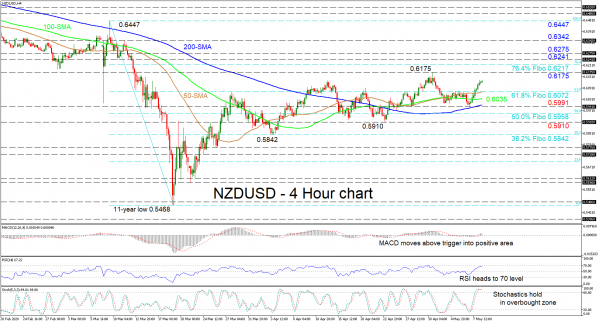 U.S. Shares Are Muddled At Close of Trade Today

Lion EV Up On Merger With with Northern Genesis Acquisition Corp

ASX Shares Top Out At a Lower Level By Close Today