Powell Testimonies and US Retail Sales to Set Market Tone

In America, important events begin early this week. On Tuesday, we get retail sales data for May (12:30 GMT), ahead of Fed Chairman Powell’s semi-annual testimony before the Senate (14:00 GMT). Powell will also appear before the House of Representatives on Wednesday (16:00 GMT) and his Q&A sessions with lawmakers on both occasions could be crucial for the dollar and risk sentiment. In the bigger picture, the main driver for markets will be how quickly US virus cases keep rising.

If any data matter, this is it

With everything going on lately, regular economic events like data releases have lost their touch in moving the markets, but Tuesday’s events might be an exception. Retail sales for May will give us a sense of the US demand picture as the economy started re-opening, and to what extent consumers remained defensive.

Forecasts point to an 8% increase in retail sales, which normally would be a huge rebound. However, coming after a record drop of 16.4% in April and another 8.3% contraction back in March, it would only be a decent bounce. This could prove pivotal for markets: a bigger than expected increase can revive the ‘this recession won’t be so bad’ narrative, whereas a disappointing reading might amplify the latest wave of risk aversion.

After that, the focus will turn to the Fed Chairman, who will testify before the Senate Banking Committee. Admittedly, we’ve already heard from Powell multiple times in recent weeks, so any new revelations are unlikely. 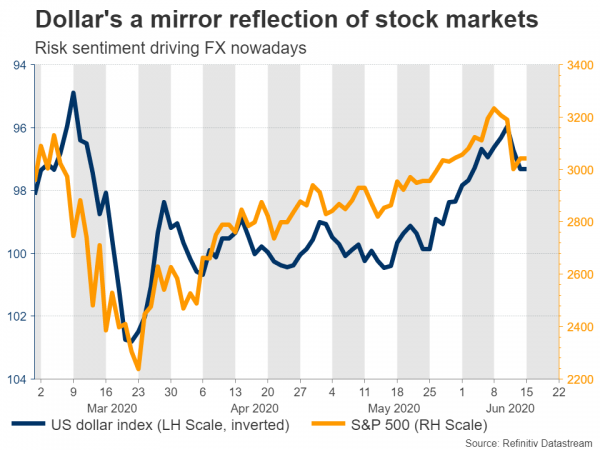 That said, the subsequent Q&A session where Powell will be grilled by lawmakers is worth watching, as the Fed chief has a tough balancing act on his hands. On the positive side, recent economic data – especially the latest jobs report – suggest the worst may have passed. However, the Fed has been far less sanguine about the outlook, routinely highlighting that the recovery may be slow and urging Congress to enact more fiscal stimulus.

Hence, Powell likelyhas more incentive to maintain an ultra-cautious tone, reiterating that many risks are still in play and that his Fed is ready to act again if needed. That could also add pressure on lawmakers to deliver another rescue package of their own. The alternative is that Powell appears relatively optimistic, potentially lessening the urgency for Congress to pass more stimulus – a scenario he probably wants to avoid.

In case Powell indeed strikes a dovish tone, the dollar could come back under some pressure, whereas stocks may get a small lift.

But the real driver will be US virus cases

Overall though, the far bigger catalyst for markets will be how the US virus picture evolves. Investors have already turned more cautious in recent days on signs that virus numbers are spiking again, and the coming few days will reveal whether the mass protests across the country boosted the infection rate further.

Since the US dollar has been acting like a safe haven in this crisis, if the mood in markets continues to worsen, that could allow the latest rebound to continue for a while – even in case of a small setback if Powell strikes a dovish tone Tuesday. In other words, the coming few weeks look like a favourable period for the dollar overall as risk aversion might continue to reign, and any cautious comments by Powell may only trigger a minor setback in a broader USD recovery.

Taking a technical look at euro/dollar, if the latest retreat continues and should the bears manage to pierce back below 1.1210, support may come next from the 1.1150 zone.

On the upside, a move back above 1.1270 could turn the focus towards 1.1340, assuming the 50-period moving average on the four-hour chart is violated first.

Charting a Course for Recovery