While creating the final part of video tutorials on how to develop with the Twetch SDK I was able to develop an alternative Twetch client, retrotwetch.

Retrotwetch is a place to discuss old school gaming where users can post to Twetch using Invisible Money Button. Users can post by using the site directly, or by posting from Twetch with the tag $osg. Currently only likes, tips, posts and BitcoinFiles images are supported. 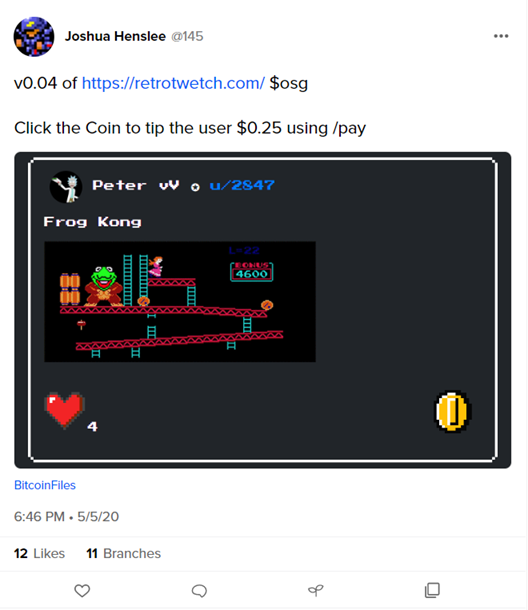 On Twetch, users can curate content via traditional means via likes, branches and following. On retrotwetch, it is done via likes only (top 50) or from posting recently (last 50).

Due to the unique theme and filtration mechanisms, users are incentivized to post relevant content to the topic and can potentially earn increased rewards (a 10 cent like, or 25 cent tip) for doing so. Also, malicious users could spam the platform with off-topic information but due to the ported over base incentive model of Twetch, they would just be burning funds while quickly becoming irrelevant due to the lack of engagement.

As such, each of the top-rated posts are all on topic (thus far!). While this client was born from a tutorial intending to show others how to build their own versions, the Twetch founders pushed me to build something that would generate revenue for me as well.

Thanks to Bitcoin’s flexible UTXO model, I can trivially alter the outputs of transactions on the platform. Developers who build other interfaces of Twetch already receive a 10% revenue share, however I can add more fees for myself (1,000 satoshis) in exchange for delivering a service to discuss niche content. I earn around 2,000 satoshis for every interaction on the site.

Additionally, I can increase the amounts received from engagement, incentivizing more usage of the platform. As mentioned above, likes are increased to 10 cents on retrotwetch. Users can click the coin to tip a user 25 cents with the /pay command. With the plumbing of the SDK and IMB, I can leverage tools that others built so I can focus on features that make my product unique. I touched on this in my previous article on Metalink.

I did not have to build logins, implement authentication, or maintain a backend. Retrotwetch was built on a weekend. The site is only a single HTML page with less than 250 lines of code. It can even be run directly from the ledger without a server. To hammer this point home, I released 3 (v0.02, v0.03, v0.04) feature updates in 9 hours.

In a recent presentation on InTheBox, Daniel Krawisz states: “The most difficult thing about learning to program is believing that you can’t do it.”

He also discusses how we have a labor shortage of developers in Bitcoin SV and I agree. There is so much opportunity to build and earn quickly in this space. This reason is the primary motivation for me creating tutorials and trying to show others how easy it is to build on top of Bitcoin. I hope this article illustrates what work is already done for us and helps to motivate others to start on their own project today!