Sales at China’s Kweichow Moutai, the world’s most valuable distiller, grew at their slowest pace in five years in the second quarter as the company came under pressure from accusations it is reaping the benefits of corruption.

That followed a 12.5 per cent jump in the first quarter as Moutai, the country’s most expensive firewater — and the spirit favoured by former Chinese leader Mao Zedong — defied a coronavirus-driven industry downturn thanks to its popularity among China’s wealthy population.

Profit was also hit, with net income attributable to shareholders rising 8.9 per cent year over year in the second quarter to Rmb9.5bn, down from 16.7 per cent the previous three months.

Shares in the spirit maker fell as much as 2.2 per cent on Wednesday, and were down 0.1 per cent in afternoon trading.

Analysts at Jefferies said the lower-than-expected revenue figure was the result of delays in product delivery due to natural constraints. Others pinned the drop on efforts by Moutai to defuse a brewing public backlash over soaring prices for both its stock and its liquor, noting the company is known to sometimes tinker with delivery and production to smooth earnings.

Top-end bottles of Moutai can cost thousands of dollars, and have long been favoured as a means for conveying bribes without handing over hard cash. Some observers have said rising demand for the liquor could imply an uptick in graft.

“The runaway growth in Moutai’s stock and liquor prices is leading to a public relations crisis given its association with corruption,” said Cai Haixue, an analyst at Sohu Alcohol. 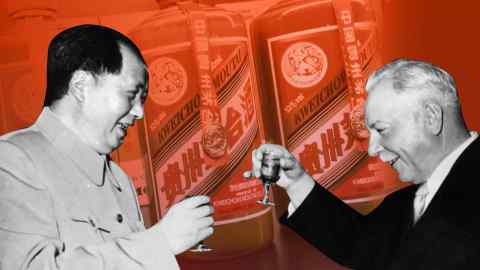 The retail price of top-tier Flying Fairy Moutai has climbed 15 per cent since Beijing relaxed lockdown measures in March. The distiller is China’s most valuable listed company, with its shares up 46 per cent this year.

The bonanza prompted a division of state-run People’s Daily, the communist party’s mouthpiece, to publish an article two weeks ago highlighting the liquor’s links to graft and accusing Moutai of benefiting. “The purpose of alcohol is for drinking rather than fuelling speculation or corruption,” said the article. About $25bn was wiped off the distiller’s market value in a single day after the accusation.

Nevertheless Moutai remains much coveted by the Chinese public, who consider the liquor a symbol of prestige. Alcohol distributors in Beijing are charging as much as Rmb3,000 a bottle for delivery in the December holiday season.

Moutai has also made progress in bolstering direct sales as it seeks to claw back profits from distributors. The company has more than tripled its direct sales to Rmb5.1bn in the first half of this year from the same period a year ago. Factory gate prices are about a third of what retailers charge.

“There is plenty of room for Moutai to improve profitability if it has better control over its sales channel,” said Li Qing, an analyst at Northeast Securities.

USD Hinges On President and Fed Helping Out

The Hang Seng Experienced Gains Throughout the Day Today

Gold Down Despite Lack of Faith in U.S. Presidency