St. John’s NL — Newfoundland and Labrador (NL) Premier Dwight Ball, along with provincial Minister of Natural Resources Siobhan Coady, expressed support for a focused initiative to persuade the federal government to provide immediate assistance to East Canada’s offshore industry, which has been hit hard by Covid-19 and the collapse of oil prices. 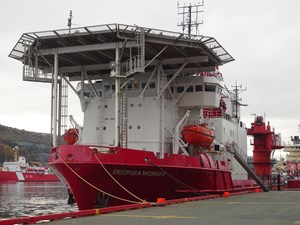 Among the sectors of the East Canada E&P industry at risk without federal Canadian help to support it are the service/supply boats that populate St. John’s harbor. Photo: World Oil staff.

During a virtual press conference, Mr. Ball and Ms. Coady officially joined forces with representatives from the Newfoundland and Labrador Oil & Gas Industries Association (Noia), the Canadian Association of Petroleum Producers, Memorial University, Newfoundland and Labrador Environmental Industry Association, and TradesNL. This united group is encouraging support for the offshore oil and gas industry, and the vital role it plays in the region’s economy.

Supporting the NL offshore oil and gas industry is essential to creating a sustainable low-carbon economy and clean energy resources. The province’s offshore projects are already among some of the lowest-intensity carbon-emitting facilities in the world, said Minister Coady.

The responsible choice, explained the minister, is to invest in the NL offshore. “We can further reduce greenhouse gas emissions by making immediate investments and set the stage for this province to become a leader in clean energy,” she said.

NL Premier Dwight Ball added, “this is an unprecedented time for the people of our province, the country and the world. COVID-19 is having a dramatic effect on our offshore oil and gas industry—an industry that has an immensely positive impact on the families and businesses of Newfoundland and Labrador. With our oil and gas industry representing such a significant portion of the provincial economy, the time is now to act and put measures in place, so we can continue to deliver vital health, education and social services to Newfoundlanders and Labradorians.”

Noia CEO Charlene Johnson concluded by saying “our offshore oil and gas industry is in crisis, thousands have lost their jobs, and Noia members fear for their future. We need the Canadian federal government to provide us with immediate and specific help. While the challenge is unprecedented, the solutions are not, and have been used before in our offshore. Support is needed now, so we can be globally competitive and lead the transition to renewable energy mixes and achieve net-zero carbon emissions by 2050.”