Silver is attempting to push back above the 17.58 key mark, after a retracement from the 18.36 peak bounced off the 200-day simple moving average (SMA). The recent bullish crossover of the 100-day SMA by the rising 50-day one may provide additional fuel to nudge the commodity back up and resume the climb.

Although the red Tenkan-sen line has stalled, the Ichimoku lines still hold a positive bearing far above the Ichimoku cloud. Presently directional momentum is frail, yet the short-term oscillators appear skewed to the upside. The MACD, in the positive section, is below its red trigger line but looks to reclaim it, while the RSI shows signals of improvement as it hovers over the 50 threshold. Furthermore, the rising stochastic lines currently endorse advances as they head higher.

If buyers pierce above the border of 17.58 – where the flattened red Tenkan-sen line also lies – the commodity may confront initial upside restrictions at the 18.18 and 18.36 swing highs achieved during early June. Overshooting these obstacles may accelerate the price to challenge the 18.84 – 18.93 area of tops. If this region fails to defend advances, the commodity may revisit the 35-month high of 19.63.

Otherwise, steering lower the nearby obstacle of 16.93, coupled with the 200-day SMA, could apply the initial brakes on the decline ahead of the 16.70 trough underneath. Losing more ground could reach the 50- and 100-day SMAs at 16.42 and 16.23 respectively, ahead of the cloud’s upper surface. Should the bears dive further, the inside swing highs of 15.83 and 15.62 could deter the test of the critical 15.30 trough from May 12.

Overall, in the very short-term timeframe the bias remains bullish above 16.70 and a break above 18.36 could reinforce it. If the commodity overruns the 18.93 peak, the neutral medium-term bias may become increasingly positive. 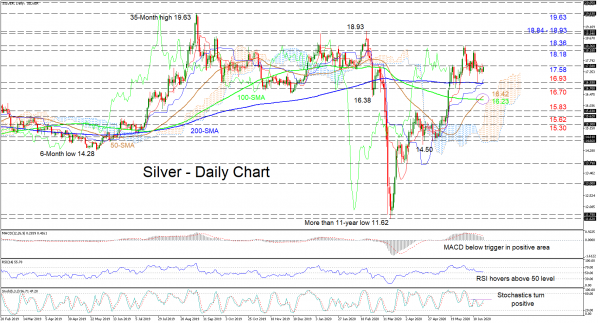 Dollar Rises At Close Despite Vaccine And Stimulus Woes