Canadian inflation was softer than expected in May with the headline reading slipping even further into negative territory on a year-over-year basis (consensus was for a slight uptick). Lower gasoline prices remain a key factor holding inflation below zero, though pump prices increased month-over-month in May and weren’t responsible for the dip in all items CPI. Food price inflation eased slightly though prices for items like meat and non-perishables remain sharply higher than a year ago. Food is still the fastest-rising category in the CPI basket, and it’s one that many Canadians are spending a larger-than-normal share of their income on at present (shifting spending patterns aren’t immediately reflected in CPI weights).

Rather than the volatile food and energy components, slower inflation in May was largely due to services prices where demand has been soft. Services inflation slowed to 1.3% year-over-year from 2.0% in April, marking a nearly seven-year low. Rent inflation continued to slow from last year’s multi-decade high, telephone service prices are falling at a record rate, and the cost of travel services was down sharply. Ex food and energy inflation fell to just 0.6% year-over-year, though the BoC’s core measures that filter out more extreme moves in individual components averaged 1.7%.

Services disinflation should become less intense as the economy continues to reopen and businesses regain some pricing power. However, we expect an ongoing shortfall in demand will make for a slow return to the BoC’s 2% inflation target. In Governor Macklem’s first appearance as head of the BoC yesterday, his views on inflation were in keeping with his predecessor’s: a persistent output gap leaves inflation risks skewed to the downside. The upshot is that ongoing monetary policy stimulus will be required to get the economy back to full capacity and inflation back on target. 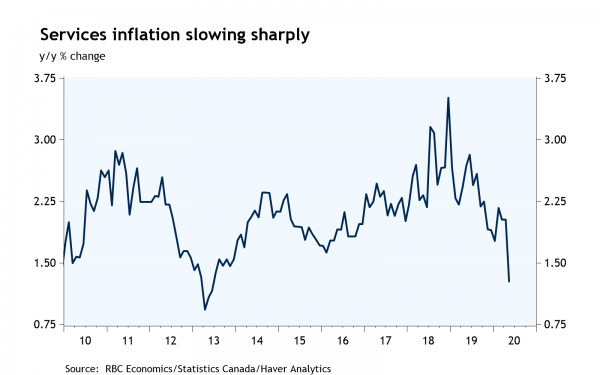 U.S. Shares Are Pulled Down By Tech Companies