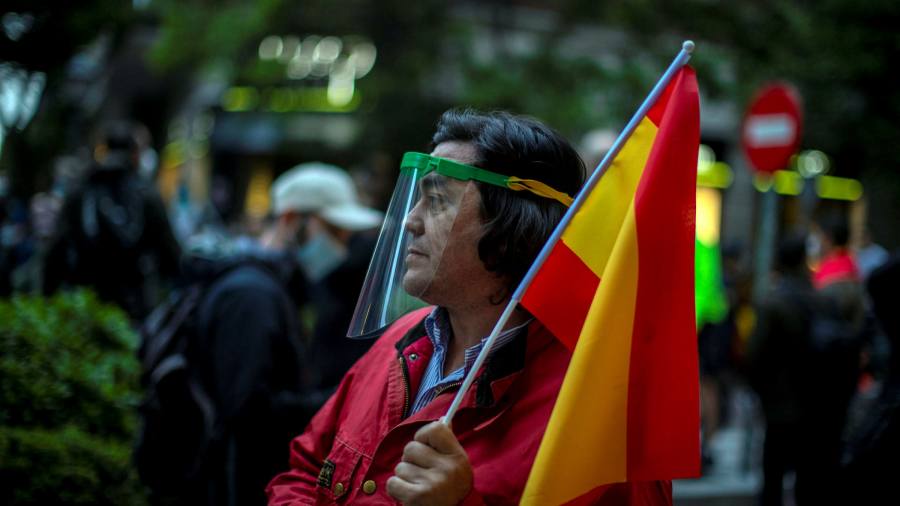 Spain’s prime minister is seeking a final month-long extension of the emergency powers behind the country’s coronavirus lockdown, as tension with his political opponents reaches new heights.

In an address to the nation on Saturday, Pedro Sánchez said a countrywide survey of infection rates had vindicated his government’s cautious approach to the lockdown, which has infuriated the regional authorities in Madrid.

“Prudence should still be the rule . . . If we choose to give priority to business over health, we will end up losing both,” the Spanish prime minister said.

Madrid has not been permitted to relax the rules at the same pace as most of the rest of the country, leading to expressions of anger from its political leadership and some of its citizens, who have been demonstrating against the Socialist-led government.

Despite the controversy, Mr Sánchez said he would be asking parliament to extend the so-called state of alert — the extraordinary legal order that gives the government sweeping powers to limit movement — until the end of the transition from lockdown, a process the government hopes to complete by the end of June.

He argued that Spain’s coronavirus study had shown the seriousness of the disease and the impracticality of pursuing so-called herd immunity, a policy he said would have cost Spain 300,000 lives.

On Saturday the country reported the smallest daily death toll since the beginning of the lockdown: a two-month low of 102 people.

Mr Sánchez added that the survey, which carried out antibody tests on more than 60,000 people, had shown that the “true lethality” of Covid-19 was one in a hundred and that without the lockdown 30m people could have been infected. At present, he said, the rate with which the virus was spreading was 0.24 per cent a day, down from 35 per cent at its peak.

He was fiercely attacked by the regional leader of Madrid, who suggested his Socialist-led government was holding her region back from loosening the lockdown for ideological reasons.

“They are keeping us hostages,” said Isabel Díaz Ayuso, a member of the centre-right People’s party, of the government’s decision not to permit Madrid to participate in phase one of the transition from the lockdown.

She added that the delay would spell “ruin” for the capital city, and suggested that her region could take legal action against the central government unless it substantiated its decision.

Under phase one — which just over half of Spain began last Monday and which, as of May 18, will affect 70 per cent of the population — people can meet in groups of up to 10 and bars and restaurants can serve customers outdoors.

Barcelona and large parts of the Castile-Leon region are also excluded from phase one, although this is less controversial with their regional leaders. The government has indicated that Madrid should improve its capability to track coronavirus infections and emphasised that a resurgence of the virus both in the capital city and Barcelona, the country’s biggest urban centres, could affect the disease’s trajectory across the nation as a whole.

Tension is rising over Mr Sánchez’s bid to extend the state of alert for a further month, which contrasts with his previous requests for 15-day extensions. In an attempt to make the request more palatable to other political parties and powerful regional politicians, the prime minister said that, while the health ministry would retain special powers over the regions during the prolongation, the defence, transport and interior ministries would not.

The government’s previous extensions of the state of alert proved controversial, with the People’s party arguing that the wide-ranging powers granted by the regime were no longer necessary now that the lockdown is being phased out. At present, the state of alert is due to expire on May 24.

On Saturday, the PP’s leadership reiterated its opposition to extending the state of alert, while Ciudadanos, a small pro-market party that backed the last prolongation, expressed reservations about the proposed duration of about a month.