After yesterday’s big plunge, index futures have recovered a tad from their worst levels on the back of some bargain hunting and short covering by those lucky enough to have held bearish positions during Thursday’s session. The market remains vulnerable though for fresh falls after the disorderly sell-off and the technical damage incurred by major indices. It is safe to assume that investor sentiment must have turned rather downbeat after that sudden plunge, and many people will now be in no hurry to fade into this latest dip, especially ahead of the weekend when the markets will be closed. For investors to step back in a meaningful way, we will need the markets to stabilise and establish a base for a few days at the very least. While some stability is needed, there is now a risk we may see back-to-back sharp falls, the like of which we experienced back in March. However, investors know central banks have got their backs. So, I have some doubts as to whether some of the major indices, including those that have underperformed like the FTSE 100, will revisit their March lows again this year. 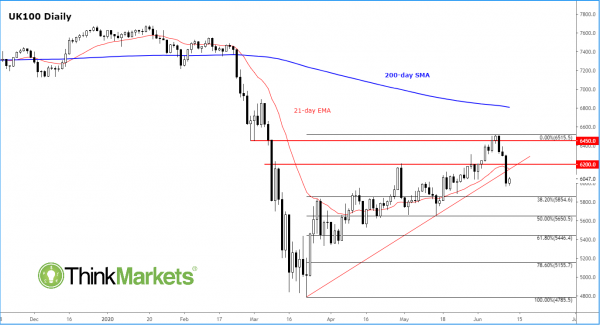 With risk appetite turning sour, investors dumped risk assets across the board on Thursday, including crude oil. However, oil prices may not be as vulnerable as equities this time around because of the historic OPEC+ cuts are still in operation. Additionally, despite fears over a second wave of coronavirus, the major economies are unlikely to go in a complete shut down again, meaning crude oil demand won’t be hit as hard as it did a couple of months ago.

After a big plunge for stocks you would expect gold to have performed much better on Thursday due to haven flows. Yet, the metal struggled to stay positive and eventually ended the day a touch lower. Some investors will remember that during the height of the stock market plunge in March, gold fell sharply then too, before bouncing back equally strongly. When stocks fall viciously, occasionally gold goes lower as well because of liquidation, whereby investors trading on margin are forced close out their (profitable) long gold positions to free up margin for their (losing) long equity holdings. Other times, gold can struggle during periods of market turmoil because of a big rally for the dollar. This time it may have been a combination of these factors. In any case, I remain fundamentally bullish on gold in the long term regardless of what it does in the short term. As I explained in THIS article yesterday, the Fed has basically ruled out any rate hikes for the next couple of years, while simultaneously boosted expectations that QE will be in operation for the foreseeable future. Other major central banks hold similarly bearish views on their and world economies and share the Fed’s sentiment on their respective monetary policy stances. Thus, bond yields look set to remain depressed for a long time. This should therefore continue to raise the appeal of noninterest-bearing precious metals on a relative basis. Safe-haven gold may also find additional support from some of the bearish factors weighing on stocks, including concerns over a second wave of infections, and raised geopolitical uncertainty.

So why has sentiment turned so negative so quick?

Fears over a second wave, specifically in a number of the so-called red states in the US. Obviously, no one wants lockdowns to return, certainly not Donald Trump and this makes some worried about what might happen in case Covid-19 infections and the death toll increases sharply across the States. So, it is definitely worth watching for signs of increasing case counts over the coming days.

The other main reason behind the falls is the Fed’s own sobering economic projections. A lot had been said of the shape of recovery and with US equities going vertical, investors had basically priced in a V-shaped recovery. But by the Fed’s own accord, a V-shaped rebound in the economy is off the table, despite the unexpected 2.5 million jobs growth in May.

Reasons to be optimistic

The big unknown is obviously whether a second wave of infections is coming or whether fears over a second wave will be sustained. Additionally, we don’t know what a second wave would exactly look like. But the good news is the world is — or should be — much better prepared now, and local hotspots of infections should be controlled more effectively this time around. Also, don’t forget about central banks. Again, don’t forget about central banks! The “Fed put” is a non-expiring option and doesn’t suffer from time decay!

Federal Shares Fall As They Fail to Provide Adequate Reassurance