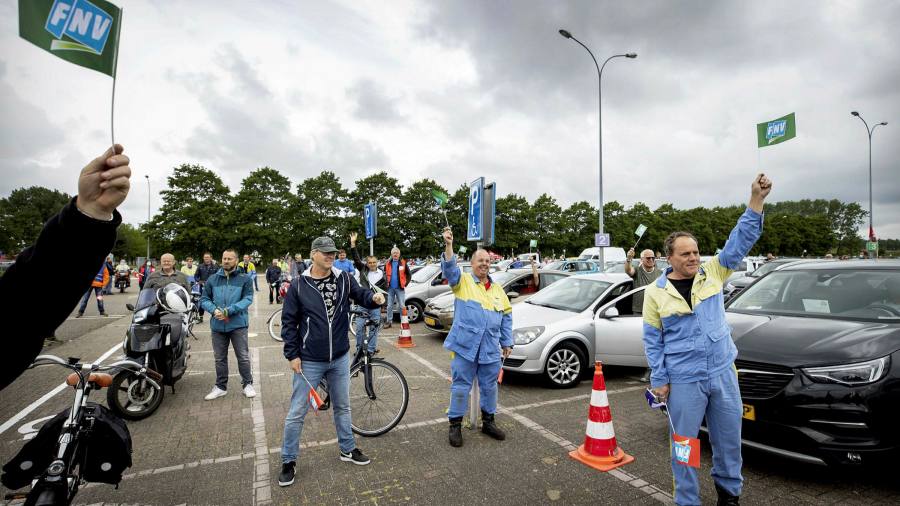 Tata Steel is braced for fresh strikes at its large Dutch plant in protest against planned job cuts, laying bare tensions at the Indian conglomerate’s European steelmaking arm as the industry reels from the impact of coronavirus.

Labour union officials have called for further walkouts at the hulking IJmuiden complex on the North Sea coast that employs 9,000 people, following the first strike on the site in 28 years last week.

Among the demands are a guarantee of no compulsory redundancies, a ban on outsourcing and a promise not to sell off any of the Dutch activities.

“It was a heavy decision but it was a necessary decision,” said Roel Berghuis, director at the FNV union. “This strike we must win.”

Long before the economic shock from Covid-19, Tata Steel Europe outlined a deep cost-cutting programme late last year in response to a market downturn. The business includes a UK operation centred on the Port Talbot works in south Wales.

Our members are very worried and angry. They say we have to stand

However, Dutch unions fear they will bear the brunt of a target to reduce headcount by 1,250 and want the threat of job losses in the Netherlands withdrawn.

Actions over the next week are set to take the form of “relay strikes”, where workers down tools at a specific installation for a period of time before the baton is taken up at another facility. An initial walkout last Wednesday by ore preparation staff led to reduced output at a blast furnace.

The unrest comes at a delicate moment, with a sharp drop in European steel consumption after lockdowns forced the temporary closure of car factories and building sites.

Metals tycoon Sanjeev Gupta last week announced he was seeking cost savings of 30 per cent, raising the spectre of redundancies at his Liberty Steel group whose main operations span Europe, Australia and the US.

Tata Steel said: “We asked our union colleagues in the Netherlands to postpone industrial action so we could continue discussions and find the best way forward to meet everyone’s interests.

“Industrial action will put further pressure on the company’s results as we continue to deal with the impact of lower steel demand caused by the pandemic. It is important we make every effort to keep the company in good health.

“The goal of our transformation programme is to secure the future of the company for generations of steel workers to come. A strong company enables us to make the investments needed to become the most responsible and innovative steel producer and leader in CO2-neutral steel production.”

Discontent among staff at IJmuiden has risen since the departure last month of a senior executive who was viewed as sympathetic to the Dutch workforce’s cause.

Union officials there are also opposed to any further integration with the British sister business, which has struggled for years to break even and has requested state financial help. Tata said it was also seeking government assistance in the Netherlands.

Peter Boeseke, director at the CNV union, said employees at IJmuiden wanted clarity about Tata Steel’s intentions for its European arm. A planned tie-up with the steelmaking activities of Germany’s Thyssenkrupp was blocked last year by the EU.

“Our members are very worried and angry. They say we have to stand,” added Mr Boeseke.