The path from Covid-19 to a new social contract 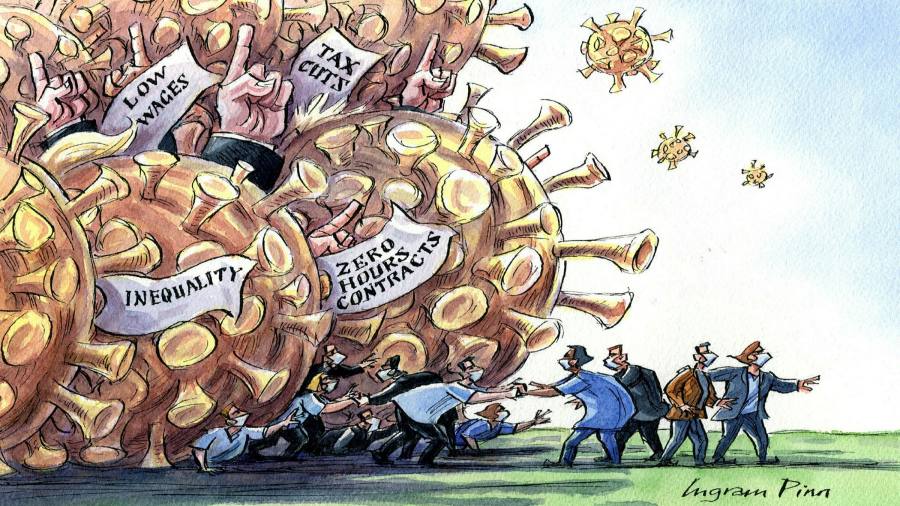 To employ an old world metaphor, entire forests have been felled in the cause of predicting how Covid-19 will change the planet. This before anyone knows if, five years from now, we will still be hiding from the virus or whether it will have been consigned to the epidemiological textbooks by an effective vaccine.

The heavy first-round costs, human and economic, speak for themselves. They need to be measured against the options that are opening up for policymakers. Left to itself, the pandemic could tip many of the world’s rich democracies over the populist edge on which they have been teetering since the 2008 financial crash. Paradoxically, it also offers a route for political leaders to rebuild faith in liberal democracy.

There is no mystery about the populism that saw Americans vote for Donald Trump as president, Britain to back Brexit and voters across Europe to flock to parties of the far-right and left. The stability of the postwar ancien régime rested on a social contract that underwrote steady rises in living standards. This varied among nations, was far from perfect and never universal, but its legitimacy was rooted in a broad perception of “fairness”. Successive generations could expect to be more prosperous than the last.

Trust collapsed with the 2008 crash and the austerity-induced recession that followed. The fracturing of the contract, however, had started much earlier with stagnant median incomes, rising job insecurity and widening income inequalities. Low-income, unskilled workers were left behind by technology, rapid shifts in comparative advantage and the slavish devotion to unfettered markets of policymakers mesmerised by something called the Washington consensus.

Once things went badly wrong, populists had only to serve up a smorgasbord of enemies — the old political elites, bankers and minimum-wage immigrants. When voters stopped believing their children were assured of a better future, they also concluded they had nothing to lose. It scarcely mattered that the likes of Mr Trump and Britain’s prime minister Boris Johnson were themselves creatures of the elites.

Coronavirus has shaken the kaleidoscope. If policymakers do nothing much, the effect will be to widen the inequality gap still further. The biggest losers so far have been workers in the low-paid, insecure jobs of the gig economy. They will also bear the brunt if governments respond to the huge increases in fiscal deficits by cutting back on future public spending.

The pandemic, however, has also changed the political argument. Competence and fairness have returned to the top of the hierarchy of things that citizens look for in their leaders. The crisis has reframed the role of the state, and, importantly, put a premium on trust. To adapt a remark once made by Britain’s Margaret Thatcher, citizens have been reminded that there is such a thing as society, and that effective government provides the essential glue.

It is no accident that the US, Brazil and Britain have all fared so badly in responding to the pandemic. Messrs Trump and Johnson, and President Jair Bolsonaro in Brazil, have learnt that bluff and bluster are no guard against a deadly virus. They have all seen their ratings fall sharply as death rates have risen. If, as the polls suggest is likely, Mr Trump loses November’s presidential election, it will be in significant part because voters know that building a wall along the Mexican border is no protection from coronavirus.

None of this is to say that mainstream leaders have an easy task. The short-term economic outlook is worse than bleak — a deep recession, sharp increases in unemployment and massive fiscal deficits. The big change, though, is that the shift in the public mood has given them the political space to mark out a different direction. It is no longer quite so obvious that the answer to every economic policy dilemma is to let markets decide, cut taxes on the wealthy and rig labour markets against the low-paid.

There is no need to reinvent the wheel. Politicians sometimes pretend that the things that drove voters into the arms of populism were unavoidable consequences of globalisation and technological change. In truth, they also reflected the choices made by governments when setting tax, spending and competition policies and dismantling labour standards. To the extent that globalisation produced so many losers, it was because national policies were pushing in the same direction.

A new social contract would start with policies to reward enterprise but punish rent-seeking, shift the burden of tax away from income and towards accumulated capital and establish job and income protections to boost productivity. Measures to cut fiscal deficits cannot be at the expense of education and training strategies to fit changing demands for skills. We all pay a price for low wages and zero-hours contracts.

Populists have prospered by exposing real grievances. The left-behinds were not an invention. The pandemic has changed the calculus by demonstrating that the supposed remedies peddled by Mr Trump and his ilk were snake oil. There is no easy way back from the effects of coronavirus, but it has pressed the reset button. Leaders prepared to offer competence and fairness — a new social contract — have an audience again. It is not an opportunity they can afford to waste.

Oil Declines As Build Up Of U.S. Supplies Raise Concerns