The Weekly Bottom Line: Fed Projection Injects Markets With A Dose of Reality

U.S. – Fed Projection Injects Markets With A Dose of Reality

It was another eventful week in financial markets, as equity investors digested the very real possibility that the road to recovery could be long and arduous. Dire economic outlooks released by the World Bank, OECD, and Federal Reserve shocked investor sentiment, leading to a sharp sell-off in equity markets on Thursday. At the time of writing, the S&P500 was down 4% from close last Friday.

The Federal Open Market Committee’s (FOMC) view on the U.S. economy was certainly a factor driving the decline in markets. Along with the decision to leave the target range for the federal funds rate unchanged at 0% to 0.25%, the FOMC also released the Summary of Economic Projections (SEP), which captured the worries of participants. The median forecast for real GDP in 2020 was a decline of 6.5% (fourth quarter to fourth quarter), before rebounding by 5% in 2021 (Chart 1). The median unemployment rate was projected to be 9.5% by the end of 2020, and only improving to 6.5% next year. The long-term view on the unemployment rate was unchanged at 4.1% implying that participants did not expect the pandemic to lead to higher structural unemployment over the long run.

In terms of inflation, FOMC members expected the headline personal consumption expenditures (PCE) deflator to increase by just 0.8% in 2020 and 1.6% in 2021. The outlook for the core PCE measure was not much different. This is in line with the weak reading we have been receiving from price variables recently.

After falling by 0.8% month-on-month in April, the consumer price index (CPI) fell by 0.1% month-on-month in May (Chart 2). Energy prices posed the greatest drag on headline prices, declining by 1.8% on the month. Food prices, on the other hand, rose by 0.7% reflecting the havoc COVID-19 was having on production facilities. Excluding food and energy, prices still declined by 0.1% in May, the first time core CPI fell for three consecutive months.

As we had written in a recent report, even with states opening up their economies, inflation will likely remain weak in the near-term. Over the long run, the outlook is more uncertain. Weak demand could keep inflation at low levels but continued extraordinary policy support could lead to more rapid price growth.

Indeed, the Fed plans on providing monetary aid for at least the next couple of years. As indicated by the SEP, the federal funds rate is expected to remain near zero through 2022. But monetary policy alone cannot hold up the economy during this crisis. More fiscal support is likely to be needed once unemployment benefits provided by the CARES Act expire at the end of July. Congress has taken up the issue and Treasury Secretary Mnuchin has backed the idea. The sooner Congress acts, the better for the economy. 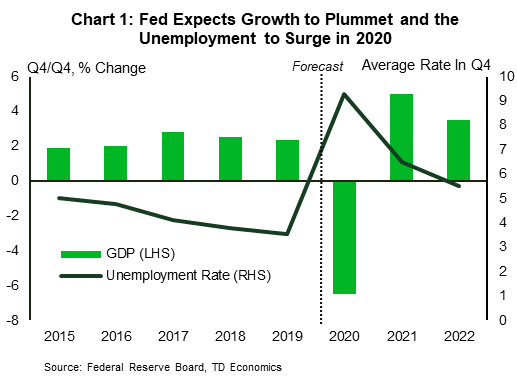 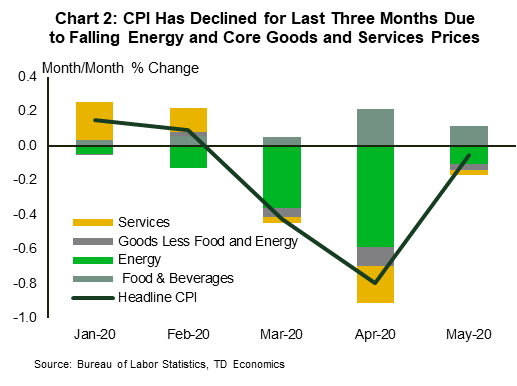 Canada – From Protection to Early Recovery

It was a whirlwind week in Canadian markets. The S&P/TSX composite index started out with a continuation of its recent solid performance, only to give back a few week’s gains as the week progressed. Thursday saw the worst performance, delivering a 4.1% drop as North American markets appeared to regain some sense of fear around the possibility of a second wave of COVID-19 infections. Oil prices dipped lower on the same concerns but remained above US$36/barrel. At the time of writing, markets had rebounded, but remained shy of earlier levels.

Just as fears of a second wave have been an important market driver, questions about what a second wave would imply for the economy have dominated our conversations with clients. Our Chief Economist’s latest Perspective offers a helpful framework for thinking about the path forward. Like in physiotherapy, the economy will go through four phases: Protection (lockdowns); Recovery (limited re-openings); Strengthening (an economic upswing); and finally, Functioning (back to normal, trend-like growth).

Thinking about the risk of a second wave of infections, it would be foolhardy to dismiss such an outcome given historical precedent and current epidemiological modeling. But, a second wave of infections doesn’t need to imply the same economic outcome as the first wave. Part of the reason for the first lockdown was to build out medical capacity – the risk of a surge in cases that would overwhelm capacity and bring an even greater human toll was clearly significant. As time has gone on, both the capacity to respond, and our understanding of the disease and its characteristics have improved. Things like mask wearing and physical distancing will continue until a vaccine or successful course of treatment is available, but there is no reason to think that the government response (and so the economic outcomes) to a second wave will need to echo the first. Indeed, as noted in a report this week, despite still elevated new cases trends in several provinces, Canadians nevertheless headed back to the shops as re-openings allowed.

Turning to the here and now, it was a relatively quiet data week. Statistics Canada’s update on the state of Canadian finances was as expected (see commentary). Balance sheets took a hit as markets dove late in the quarter in response to the pandemic. The pre-pandemic strength in housing markets drove an uptick in mortgage borrowing, sending household indebtedness a bit higher (Chart 2). The pandemic also made itself felt in debt servicing costs, which fell as some households chose to defer their payments. We expect debt servicing costs to continue to fall, helped by deferrals and lower interest rates.

Pre-crisis housing trends also showed up in the May housing starts data, which was further helped by a resumption of construction in Quebec (Chart 2). As we noted, current housing construction is driven in large part by past demand, which can explain why this area has bucked the pandemic trend so far. But with labour markets decimated several times over by the pandemic and population growth likely to slow dramatically this year, the construction sector, and new builds in particular, is set to face a weaker demand environment in the months and quarters to come. 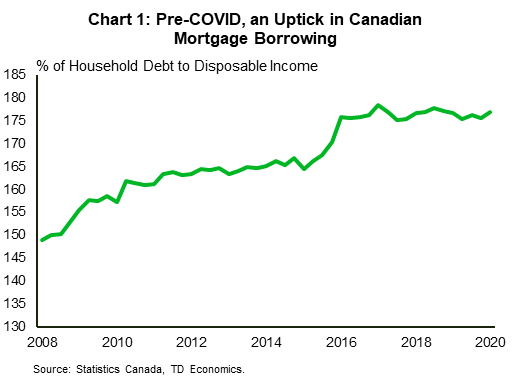 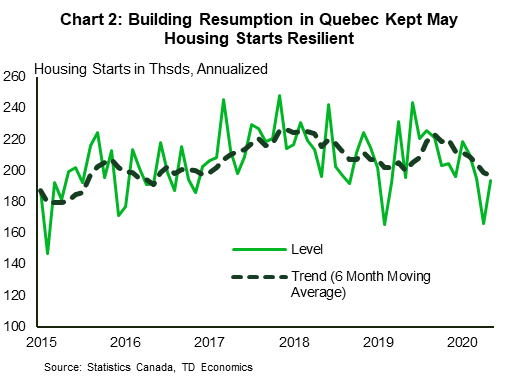 We forecast an 11% m/m jump headline retail sales (+9.5% ex-auto) following the sharp 16% plunge in April. We expect control group sales to rebound 6.5% after -15% m/m. Spending probably surged as the economy started to reopen, but the level was probably still down sharply on a y/y basis (by an estimated 13%) and we caution against simply extrapolating. While wage income should keep strengthening, support from stimulus payments will fade. Also, supplemental unemployment benefits will likely be less generous after the current program expires. 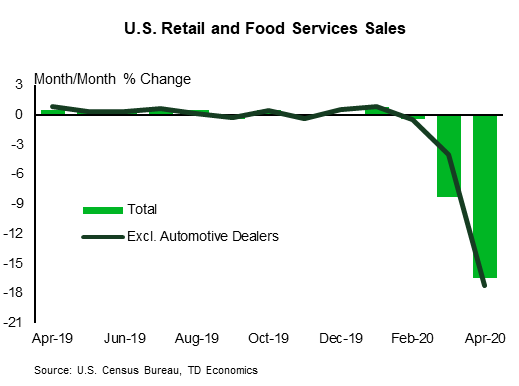 Manufacturing sales are forecast to post a 20% m/m decline in April that will build on last month’s weakness and leave activity at its lowest level since 2009. Durable goods will lead the decline on a sharp drop in transportation equipment – auto production flatlined in April which led to an 80% decline in exports, and other transportation equipment will be heavily impacted as well. Nondurables should see some offset from higher sales of food products, but refinery shipments will exert a heavy drag even before accounting for lower gasoline prices. Manufacturing volumes should see a less severe decline, although one that is still consistent with a record-breaking contraction for industry-level GDP. 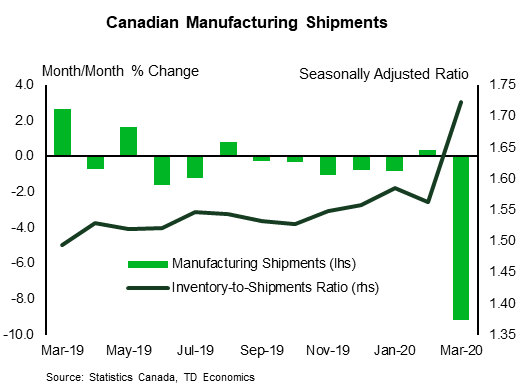 Headline CPI should return to positive territory at +0.2% y/y in May, helped by a sharp recovery in gasoline prices that will provide the driving force behind a 0.8% m/m increase in the headline index. Gasoline prices began to push higher in then last week of April and by the end of May were already 20 cents/l, or roughly 25%, above their lows. Other energy products should a more muted performance, while food will provide a modest tailwind on higher grocery prices. Looking past food and energy, we look for shelter prices to weigh on the headline index, reflecting expectations for another decline in rental prices along with some moderation in mortgage interest and homeowner replacement costs. Apparel and travel services will also remain under pressure, which should lead to a modest decline in the seasonally adjusted xFE index. Other core measures should also drift lower, with the average of the Bank of Canada’s preferred measures expected to slip to 1.7% y/y. 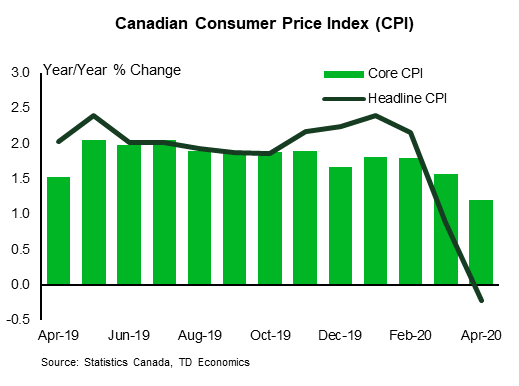 Retail sales are poised for another historically weak month, with total sales expected to fall 19.5% m/m following a 10% decline in March. Auto sales will once again lead the drop, with monthly sales falling to the lowest level on record (since 1996) as emergency measures shuttered dealerships across the country. Ex-auto sales should fall by 13.5%, reflecting a significant headwind from lower gasoline prices that will weigh on sales at the pump, and a sharp pullback in the ex. autos & gas measures. Clothing and other apparel should see further declines, and unlike March we do not expect any offset from grocery stores. A pullback of this magnitude would leave retail activity at a level not observed in nearly a decade and exert a heavy drag on industry-level GDP for April, even if volumes see a less severe decline. 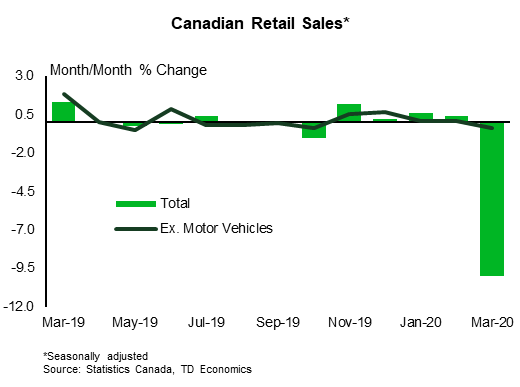 British Pound Rose With EU Promise to Up Brexit Talk