Equity investors were relatively upbeat (again) this week. Rising political tensions between China and the U.S. took the steam out of momentum as the week ended, but even so, the S&P 500 was up over 2% as of writing on Friday.

On the economic front, higher frequency and survey-based data continue to show nascent signs of recovery, while traditional, but lagged indicators demonstrate the extent of decline in activity through the peak lockdown period in April.

This story was most evident in plunging personal spending data. Real, inflation-adjusted spending fell over 13% (non-annualized) in April. On top of the 6.7% decline in March, this brings total spending down nearly 20% since February.

Encouragingly, the same plunge did not occur on the income side, where government transfers more than offset the drop in market income (Chart 1), allowing real disposable income to rise a record 13% in the month.

With the combination of a drop in spending and higher income, the personal saving rate rose to a truly extraordinary 33% (Chart 2). This is a hopeful sign that timely government income supports have done their job in setting the conditions for a healthy rebound in spending in the second half of the year.

Indeed, this has likely contributed to an improvement in consumer expectations. This week, the Conference Board reported that consumers remained negative on the current economic situation in May, but their expectations for the future moved higher. Economic optimism appears to be moving higher across major economies. In Europe, economic sentiment also improved according to a European Commission poll, led by expectations for employment.

Sticking with Europe, another hopeful sign this week was the European Commission’s announcement of an ambitious economic recovery proposal worth 750 billion euros – 5% of GDP. The proposal is split between 500 billion in grants and 250 billion in loans. Countries such as Italy, will receive significant support, which is important since it is facing high debt levels and rising borrowing costs. It remains to be seen if European countries will accept the proposal as it will require new revenues sources and must be passed with unanimous support of all 27 member states.

Next week is a big one on the economic front, with ISM data and the employment report for May. Jobless claims data continue to show a fall in new applications, but a high number of continuing claims – especially after including those who qualified under expanded benefits, suggests that May could see the unemployment rate rise from April. Fingers crossed, this should be the peak. 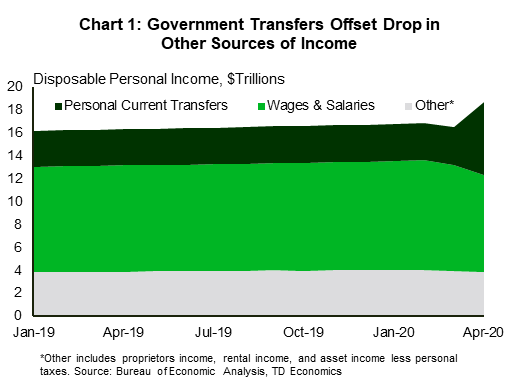 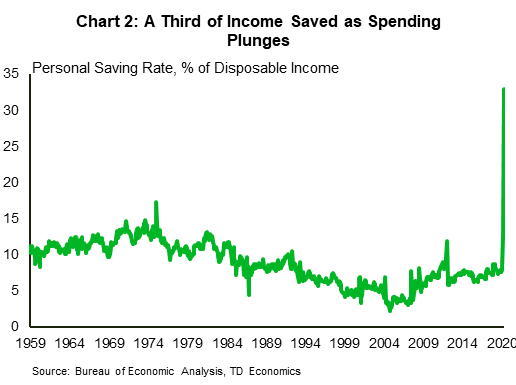 It was a case of rising tides lifting all boats as hefty stimulus packages announced in Europe and Japan this week helped buoy financial markets around the globe, including in Canada. The TSX moved higher through most of the week, although, as of writing, appears to have lost some momentum on Friday.

On the data front, the marquee event this week was the release of Canadian GDP for the first quarter. Markets had been primed for an ugly result. Back in April, Statistics Canada released their nowcast calling for a truly horrific 10% (annualized) contraction in first quarter GDP. In the event, GDP came in somewhat above this projection, dropping by 8.2%. Household consumption posed the largest drag on GDP, as social distancing measures, job losses and government shutdowns of several industries led to an historic decline in spending. Industry-based GDP also plunged 7.2% (non-annualized) in March, providing terrible momentum heading into the second quarter. This, alongside an absolutely gruesome month for the economy in April (Statistics Canada’s nowcast, released alongside the first quarter GDP report, points to an 11% monthly contraction), sets up the economy to retrench at a nightmarish pace of around 40% annualized in the second quarter.

It clear that the Canadian economy has a huge hole to dig itself out of. Fortunately, there were tentative indications this week that at least some of the digging was done in May. Indeed, the May CFIB small business barometer, a measure of small business confidence, climbed above 50 for the first time since February and was up 22 points from its March nadir recorded at the onset of the pandemic. Progress on provincial re-opening plans and the rollout of government support program are likely stoking some optimism among small businesses.

Of course, with small businesses operating at only half their capacity, it’s clear that their road back to a new “normal” will be tough. This is true not just for small businesses, but many parts of the Canadian economy. This was reinforced by the headline-grabbing forecast for the housing market released by CMHC this week, calling for notable weakness ahead. Digging into their projection, they expect sales will continue to fall through this year from what appears to be an optimistic starting point in the second quarter, while rising at subdued rates in 2021. Our own projection builds in an historic decline in second quarter sales but anticipates improvements from there as provincial re-openings unfold and labour markets improve.

The most attention-grabbing part of CMHC’s forecast was undoubtedly the call for declines in average home prices of between 9-18%. However, those forecasts are peak-to-trough from pre-pandemic levels, not annual average changes, as is what is typically is reported. On this basis, their forecasts range from a modest gain to a small drop this year, followed by more substantial declines in the order of 6-11% in 2021. Drops of this magnitude next year are certainly possible. However, with sales already at their lowest level since at least 1988 in April, and some pent-up demand already evident, we are comfortable with our more sanguine view.. 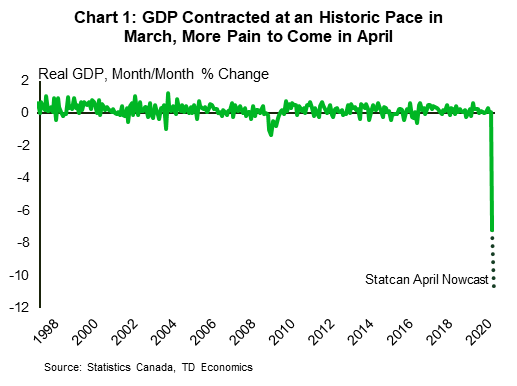 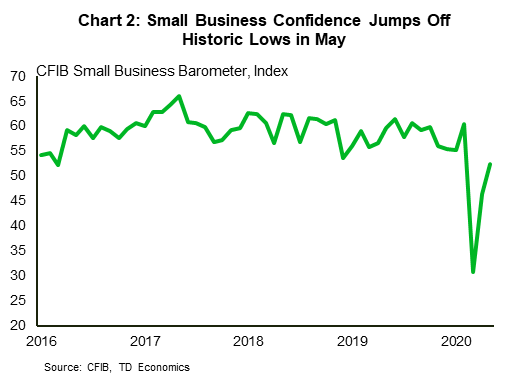 Regional surveys, as well as the Markit PMI data, have been showing some fading of weakness in May. The surveys’ details have been showing more fading of weakness than the headline data due to a reversal of earlier strength in the deliveries components. Index levels have remained in contraction territory, however. The ISM surveys will likely show the same pattern. We forecast modest increases for the manufacturing and non-manufacturing indices to 44.5 and 44.0, respectively. 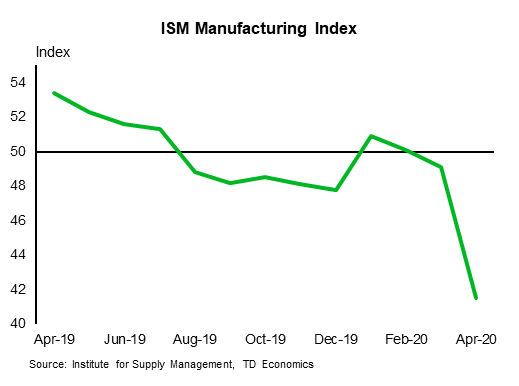 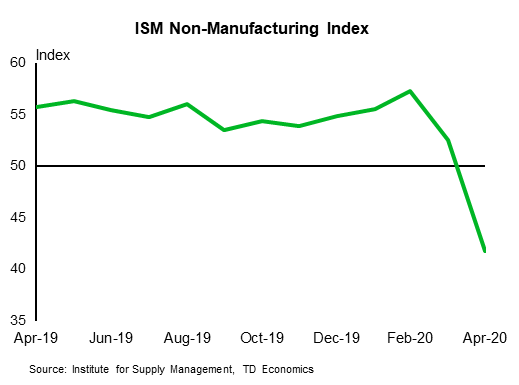 Payrolls probably fell again (TD forecast: -3mn), but by much less than in April (when they plunged by 20.5mn). The drop in continuing claims in the latest weekly report suggests a turning point, with hiring starting to recover, but the net result was probably still a decline on a monthly basis. Unemployment likely rose again (TD: 17.5%), due in part to a reversal some of the statistical issues that held down the rise in April, but it should start declining after May. 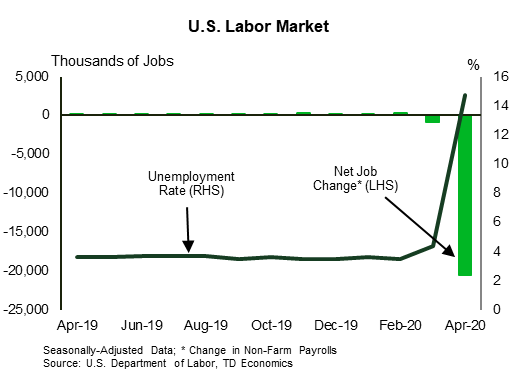