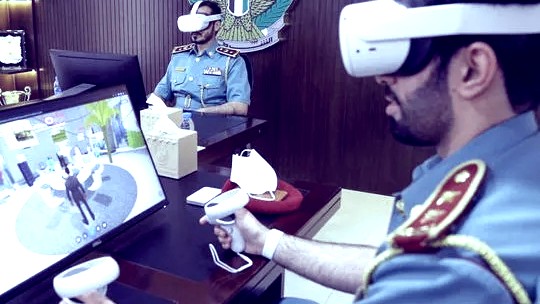 In the metaverse, a virtual reality platform, members of the public will be able to meet and interact with the Ajman Police Department. Avatars of officers will respond to questions that people have about the department.

The metaverse is a platform for virtual reality that allows users to connect with one another through the use of augmented reality, 3D holographic avatars, and films. The locals have the opportunity to own property and even to play host to weddings.

It is also possible for it to integrate augmented reality, which blends elements from both the digital and the real worlds. The Ajman Police Department will make use of this technology to assist members of the public with their inquiries.

The Al Nuaimaiah police station sent seven policemen to receive training in metaverse technology. This training includes instruction on how to use virtual reality (VR) glasses and headsets.

“This was an experiment, but given that it was effective, cops will continue to visit citizens digitally,” said Maj. Noura Sultan Al Shamsi, head of the public relations team for the Ajman Police Department.

She stated that police held meetings with locals in person before to the debut of the service, and after those discussions, officers decided to investigate the possibility of using virtual meetings to make things simpler for persons who might not be able to visit the station in person.

The purpose of the sessions was to find out what the people needed and to respond to any questions they had. She explained that at that point, “we thought of thinking of a means to facilitate this that does not require people’s physical presence.” According to what she claimed, the brand-new service would soon be accessible at all of the police stations in Ajman.

LCA is a distinctive NFT project

gDEX heavily engages in the metaverse