The UK has agreed to buy up to 60m doses of a vaccine being developed by Sanofi and GlaxoSmithKline if the companies are able to prove its efficacy against Covid-19 in clinical trials to start in September.

Financial details of the accord were not disclosed in a joint statement from the companies on Wednesday.

Countries have pledged to pour billions into helping pharmaceutical companies bring a vaccine to market in an effort to compress a process that usually takes a decade into a period of 12 to 18 months. The moves have prompted fears among public health experts that so-called vaccine nationalism will lead rich countries to hoard treatments while poorer ones have to wait.

The US has been particularly active via its Biomedical Advanced Research and Development Authority (Barda), which pioneered the model of bankrolling the manufacturing of doses before efficacy has been proven.

Paul Hudson, Sanofi’s chief executive, touched off a firestorm in the company’s home market of France when he suggested that the US would be first in line for the vaccine because of Barda’s swift action.

Britain’s deal with Sanofi and GSK is the fourth such advance purchase agreement it has signed since May.

It earlier agreed to buy 100m doses of the Oxford university vaccine being developed with AstraZeneca, as well as 30m doses from Germany’s BioNTech and US group Pfizer. A further 60m doses will come from France’s Valneva, which is less advanced in development than the others.

Kate Bingham, chair of the UK government’s vaccines task force, underlined the importance of securing a variety of vaccines to maximise the chances that one or more would be effective in quelling the pandemic.

“This diversity of vaccine types is important because we do not yet know which, if any, of the different types of vaccine will prove to generate a safe and protective response to Covid-19,” she said. 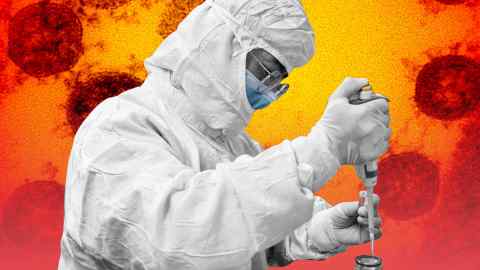 “The fact remains we may never get a vaccine and if we do get one, we have to be prepared that it may not be a vaccine which prevents getting the virus, but rather one that reduces symptoms,” she added.

Sanofi, one of the world’s biggest vaccine makers, has two potential vaccines in development to treat Covid-19. The one with GSK is a traditional protein-based vaccine, and if the clinical data are positive, approvals may come by the first half of 2021.

The second vaccine being developed is what is known as an mRNA vaccine, a new type that promises to be faster to manufacture but remains unproven.

Separately on Wednesday, Sanofi raised its annual target for earnings per share growth to between 6 and 7 per cent, up from 5 per cent. Second-quarter revenue fell 4.9 per cent to €8.2bn as lockdowns dented demand for vaccines and cardiovascular and diabetes drugs.

Cost cuts, which are a central part of Mr Hudson’s promised overhaul of the group, helped boost quarterly net income by 3.6 per cent to €1.6bn.

Sanofi shares have remained largely flat this year, after rising about 10 per cent in the previous six months as investors turned more optimistic about Mr Hudson’s plans for the company.

Video: Coronavirus: the global race for a vaccine | FT Interview